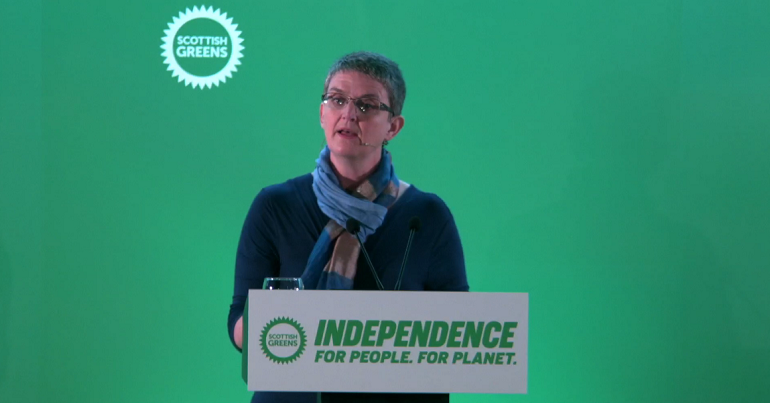 Members of the Scottish Green Party are meeting in Dundee this weekend for their autumn conference. The event was opened by Maggie Chapman – one of the seven-strong group of Green MSPs.

Chapman opened the conference with a message of solidarity for workers engaged in industrial action. She told the conference, “Last month, I was honoured to speak at the Power to the People Enough is Enough Rally here. We shouted our support for the Dundee University Unite workers who are fighting for their pensions. They’ve been on strike for over 7 weeks in protest at imposed pension cuts that will disproportionately affect women and younger workers, some seeing a loss of over £5,000 a year. All this when University Principal, Professor Iain Gillespie, is earning over a quarter of a million pounds a year, and vice principal Wendy Alexander – remember her? – is earning £170,000 a year. I know you’ll want to join me in saying victory to the striking workers at Dundee University.”

She continued by expressing support and solidarity for the railway and postal workers currently engaged in strike action, saying, “And we are seeing workers and communities across Scotland come together to support each other, campaign for change, and be the alternative to the Tory dystopia. The railway workers and postal workers on strike. Again, join me in saying victory to the CWU, victory to the RMT!”

Chapman went on to announce a commitment to proposing new legislation in the Scottish Parliament to guarantee free transport home for late night hospitality workers, if a motion at the Scottish Greens Conference on the issue passes. She said, “I’m delighted to say that, if tomorrow’s motion passes, working with Unite Hospitality, I hope to bring forward a Members Bill in the Scottish Parliament to deliver the legislative changes required”, adding, “I hope that my Bill will make free transport home for late-night workers a pre-requisite for all new liquor licences.”