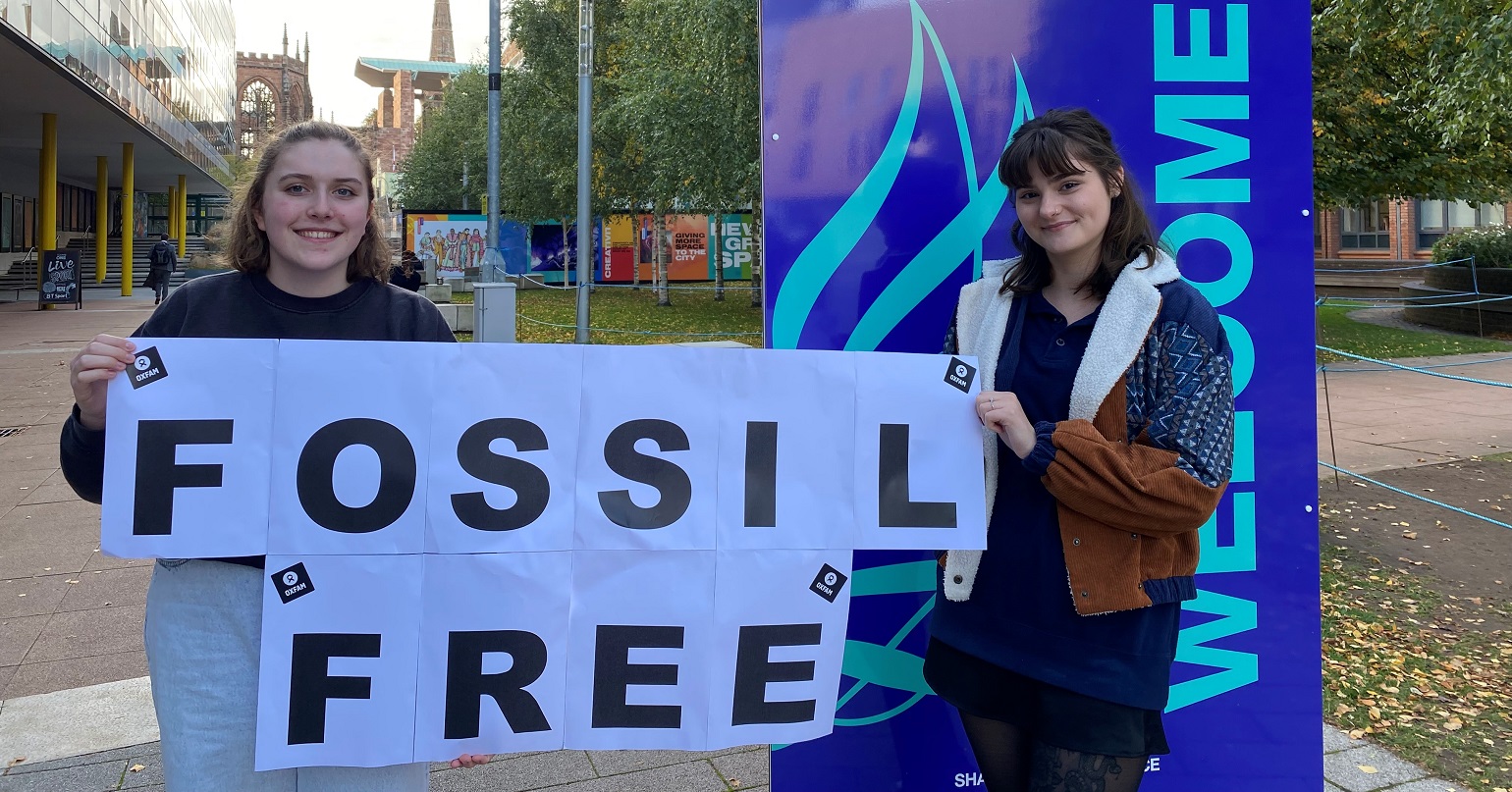 Today my university made history. Coventry University became the 100th UK university to cut investment ties with the fossil fuel industry. Following a student-led campaign, Coventry joined the critical mass of universities taking meaningful action in the name of climate and social justice. This is a moment to celebrate, whilst also highlighting what we should condemn: 53 UK universities continue to support an industry profiting from colonial and environmental violence on a global scale. This must end.

Fossil Free was officially launched by the People & Planet network in 2013 and, at the time of writing, had resulted in £17.6 billion worth of endowments being blocked off from fossil fuel investment. In 2014, the University of Glasgow became the first university in the UK – and Europe – to go Fossil Free, paving the way for the 99 others that have followed since. Campaign commitments now span the UK, from Canterbury to Belfast. Fossil Free, which is first and foremost about international solidarity, uses divestment as a tool for stigmatising the fossil fuel industry. And this announcement of 100 universities severing ties asserts a clear challenge to big polluters’ social licence.

Fossil Free’s success is rooted in the collective organising power of students like myself, often alongside alumni, staff and the local community. Tactics are drawn from and build upon those used during the successful solidarity struggle against South African Apartheid and the tobacco divestment movement, from petitions to occupations of university buildings. It’s vital that the entire university sector go fully Fossil Free following this 100th announcement and there are three clear reasons why.

First, the climate crisis. Between 1988 and 2017, 71% of the global carbon emissions contributing to the climate crisis were from fossil fuel producers. Divestment is demanded in recognition that the industry cannot be, will not be, and evidently is not being a part of the solution to a crisis of its own making. This is because there would be an impossible tension to overcome: their business model relies on profit through the extraction and production of fossil fuels, not the prioritisation of people and the planet.

Yet, BP, Shell, Chevron, ExxonMobil and TotalEnergies were recently exposed to have spent a combined $750 million on climate-related communications touting their commitment to tackling the climate emergency. All the while only 12% of their capital expenditure was designated for ‘low-carbon’ expenditure. Furthermore, across the industry fossil fuel expansion, rather than reduction, continues to be the target, with 20 of the largest oil and gas producers due to spend just under a trillion dollars developing new oil and gas infrastructure by 2030. In the words of Royal Dutch Shell’s own internal messaging guidance for employees, which was designed to help them avoid lawsuits: “Please do not give the impression that Shell is willing to reduce carbon dioxide emissions to levels that do not make business sense.”

Second, for climate justice. This means acknowledging that whilst the climate crisis will impact everyone, it is dividing those impacts along existing lines of inequality. Already those most affected are disproportionately racialised, Indigenous and based in the Global South. And global wealth disparities rooted in empire, slavery and colonialism – all British legacies – continue to dictate a community’s ability to prevent, mitigate and rebuild after a climate-related disaster. From Pakistan’s most recent floods to the prolonged drought in North-West Kenya, demands for climate justice from frontline communities require action. The UK university sector should rally in support, instead of undermining these struggles through their investments.

Third, as an act of solidarity. Since fossil fuel companies arrived on their lands people have been forced to resist their destructive extraction projects. In Northern Colombia the Wayúu Indigenous Peoples continue decades-long resistance to the UK-listed Glencore Cerrejón open-pit coal mine. The mine’s ongoing expansion has led to the dispossession of entire Indigenous and Afro-Colombian communities. They have continued to push back in a multitude of forms – from road blockades to litigation. In the Niger Delta, resistance is currently focused on the planned swift exits of multinational oil companies such as Shell and ExxonMobil. These companies appear intent on leaving communities to pick up the multibillion dollar bill for decades of devastation, from decimated farmland to respiratory illnesses. In response, affected communities are demanding restoration and reparations.

Impacted Indigenous and frontline communities were the first to make the call for fossil fuel divestment. And it is essential that the UK higher education sector responds with action. Industry strategies to tackle their stigmatisation by campaigns like Fossil Free will continue to involve greenwash and deception. In reaction to this, student campaigners like me must continue to highlight the truth behind their operations and centre those on the frontlines of climate and extraction injustice, as we demand the final 53 universities commit to a future that is fully Fossil Free.