How the left has lost?: New Labour

This piece by Kevin Meaney is for our series on ‘how the left has lost’.

There are many reasons for the losses suffered by the left in the UK which this series discusses, but I believe part of this is due to the Labour Party and most importantly New Labour. Why do I say this?

The political discourse in the mainstream media in the UK is dominated by the two main political parties by what they say and how they say it. They frame the political debate. During the last Government Labour was cautious and concerned with polling numbers so that they responded to the public mood instead of trying to reframe the debate. During David Cameron’s leadership of the opposition Cameron also kept to the middle ground and by doing so managed to successfully detoxify the Tory brand. However since entering Government the Tories have immediately gone on the attack and through words and actions have moved the political landscape in the UK to the right. This can be seen in the way that the BBC in its flagship news and current affairs programs will never consider the possibility that the proposed cuts are unnecessary but instead will only discuss where the cuts are going to hit, and how hard. This has happened before, when Thatcher came to power her words and actions moved the discourse to the right and during 13 years of the Labour they never attempted to move it back again.

Reframing the political debate is potentially dangerous because if the public does not accept the reframing then you lose the next election, but without it then over time the whole political landscape moves to support your opponents who take the risk.

This lack of committment by Labour to any core values whilst still being viewed by the mainstream media as the left of centre political party does continual damage to left wing politics in the UK. Because of this loss of ideology the only ambition Labour has left is getting into power, but then it doesn’t know what to do with it once there. Whether this is true or not, this is the appearance of it and in this case appearances matter.

During the last 13 years Labour never demonstrated real committment to reducing inequality, and consequently inequality is higher now than when Blair was elected in 1997. Globalization puts real pressure on rates of inequality and Labour did actually implement a number of policies that mitigated the worst effects of globalization on increasing inequality. The problem is that Labour did not consider dealing with any of the causes behind increasing inequality but instead implemented a number of band aid solutions. Even so Labour appeared embarrassed by these attempts at income redistribution and kept quiet about what they were doing or explaining why it was necessary. The UK has one of the highest levels of inequality in Western Europe and the impact of this is destructive in many areas of society from health, mental health, education, social dysfunction, and reduced social mobility.

Labour’s attacks on civil liberties whilst in Government have also been costly, the left is tarnished with Labour’s authoritarian brush. At the same time Labour has been prepared to condemn strike action as deplorable and has hardly demonstrated a real concern for the disadvantaged and the poorly paid. Just a few short months into a Tory Government and we truly know what the Tories stand for by their targeting of the poor and the vulnerable to pay for the financial mess the bankers got us into. And that is another thing, where was Labours committment to proper regulation of the financial system.

When voters don’t know what you stand for and the economy is a mess then they vote for the other team, even when it is clear that most of them didn’t like the policies of the other team before the election and they hate the new post election policies.

Labour squandered 13 years of government, they did not attempt to undo the social damage done to the UK by the Thatcher and Major Governments. Labour did not attempt to redefine the debate by demonstrating a belief in the Public sector and Public services. Labour accepted without question that light touch regulation is good regulation, that privatization is good and that free markets are good.

History has shown that Labour is part of the problem, not the solution, I hope Ed Miliband proves me wrong but I wont be waiting around to see if I am but instead fighting for change outside of the Labour Party and hoping that the voice of myself and fellow travellers will be heard above the din of Labour and the Tories. 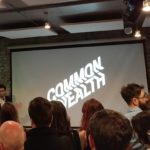 « A World in Crisis… What is the Alternative?
No ideas? Try the Greens »