Dick of the Year: Nadine Dorries

This is a nomination for Bright Green Dick of the Year by Steven Maclean. If you want to submit your own nomination email adamramsay @ gmail by midday on the 31st.

Nadine Dorries or ‘Mad Nad’ is my nomination for ‘Dick of the Year’, and having put in a good deal of practice in over preceding years, I think England’s answer to Sarah Palin has a good chance of taking the crown.

Dorries started the year as the first member of the new parliament to face complaints about expenses claims, before swiftly moving on to the reality TV show ‘Tower Block of Commons’ where MPs stay with welfare claimants. According to her hosts, Dorries’ idea of fitting in with the ‘commoners’ was to cheat by stuffing £50 into her bra and then offer them Temazepam. Classy.

Concerned that all her ‘dick’ training over the last few years might amount to nothing, Dorries made one last attempt to be recognized for her dickishness in October. After the MPs’ standards watchdog criticized her blog for misleading constituents on how much time she spent in her constituency. Dorries responded saying: My blog is 70% fiction and 30% fact…I rely heavily on poetic license and frequently replace one place name/event/fact with another.” But this didn’t really explain her blatant lies about where her daughter went to school. 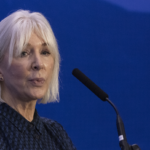