Of course, GDP is a bizarre way to measure the success of an economy. But it is the measure of success this government chooses to use. And so it’s worth considering. And so, when George Osborne tells us that it is going in the right direction, he is making a basic arithmetic error. GDP shrank in the 6 months to March. OK, only by a small fraction. But it shrank none the less.

As Duncan Weldon points out, this is pretty disastrous for those who believe in GDP as a key measure. If the 0.5% shrinkage was due to snow in December, you’d expect this to bounce back – if a company doesn’t go out to buy something in December, it buys it once the snow melts in January. Wheldon argues that real growth this quarter – accounting for these delayed purchases – would need to sit at 0.7% at the very least. And so the 0.5% we see is in fact the sign of a continued stagnation.

But this is not what the government should be worrying about. Because these figures come before the cuts started to hit. This effective drop in output is merely what has happened as the government has ended its fiscal stimulus. But, since the end of the quarter that these figures tell us about, the cuts have started to hit. And retailers are clear about their impact. The last few weeks have been, we are told, ‘chilling’. Shops are already suffering from demand dropping of a cliff. This surely is a recipe for unemployment and a long term downward spiral.

And the government seems to me to have basically 3 strategies to encourage the economy back to growth. Let’s leave aside for a second the impacts on our communities of these strategies. Let’s take the Tories at their word and see the extent to which these plans will truly deliver the growth they hope for. As I see it, you we can look at the three strands of the government’s growth strategy as follows: 1) export led growth, 2) privatisation and deregulation, 3) re-inflating the financial bubble. You could argue that they are investing in technology because they aren’t cutting it quite as much as they are cutting other things, but I’m counting that in export led growth.

So, let’s look at exports first. As I’ve asked before, where does the government think it’s going to export to? The EU is in serious difficulty. The US has just pushed through massive cuts. China and India are putting the breaks on their economies in order to try to combat inflation. Where exactly is the sudden surge in demand that British companies are supposed to be suddenly meeting?

And let’s look at the crude category I’ve dubbed ‘privatisation and deregulation’.

Let’s start with deregulation and enterprise zones. Gary Dunion has written here before about their legacy in the 80s. They were a complete failure – for the net number of jobs created, it would have been cheaper to put people on the Treasury payroll. At the same time, they up-rooted city centres and helped deliver much of the clone town Britain we see today.

Or, how about privatisation? This isn’t something the government shouts about so much. But it does seem to me that they think it will get the economy moving. They are effectively turning much of the welfare state onto its belly and letting the private sector feast on the carcass, hoping the national economy will grow in the process. Of course, the idea that work done by the private sector means wealth creation, wile the same work done by the public sector means wealth destruction is as ludicrous as it is widely believed. But even assuming it is true, how much of this money will go to UK based companies?

The firms set up to benefit from mass privitisations are those who already run these services elsewhere. So, the big sell off of British Electric has led to huge profits for the French state electricity company EDF. Many of our privatised railways are run by German companies. What about health? It is not for nothing that Care USA (through their British front Care UK) has donated cash to Health Secretary Andrew Lansley. Their chief executive receives, according to Elizabeth Edwards, $1 in every $700 spent on healthcare in the USA. Now they see the UK market opening up in front of them. How much of our money will be whisked off to the states to further fill his pockets? How many of the beasts the Tories are fattening on the upturned belly of our welfare state are even British? How many of these privatised pounds will stay on our shores? Do we have companies set up ready to run these services? I would guess that, in many cases, we don’t. If we don’t, then surely much of this money will be spirited out of Britain.

Finally, there are attempts to re-inflate the banking bubble. This may or may not succeed. But if it does, we had all better be ready for credit crunch mark 2. 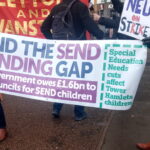