Lessons for Labour (and the left)

Adam Ramsay 5 May 2011 Lessons for Labour (and the left)2011-05-05T17:30:50+01:00 *Rights & Democracy*, Scotland 3 Comments
It should have been Labour’s year. Only 12 months ago, Scots turned out in droves to send Gordon Brown back to Downing Street. Yet today, it looks like Iain Gray’s party is going to take a kicking. And frankly, they only have themselves to blame.

In Wales, the main question for the party is whether Carywn Jones will get an outright majority. Across England, Labour councillors will be returned in seats they haven’t held for years. Scottish Labour can’t pin the blame for their failure on Ed Miliband, or on the UK party. They must look to themselves. This was their election to lose, and they’ve almost certainly lost it.

And this is, in a sense, as extraordinary as the SNP victory in 2007. In 2003, Labour hung on despite the polls taking place weeks after the bombing of Iraq began – a war even less popular in Scotland than in the rest of the UK. Yet Labour maintained their lead. In 2007, the vote was in Tony Blair’s last months as Prime Minister. Now, it is taking place amidst a Labour resurgence not seen for years. And yet Labour in Scotland looks set to lose tonight – and to lose the popular vote by a long way.

So, what’s gone wrong? Well, first, credit where it’s due, the SNP have run an impressive campaign. They have focussed their air war on Labour’s key weakness – Iain Gray is a boring, uninspiring man. Alex Salmond is a bombastic leader people can’t help but love and admire. They have had an impressive ground game for years now.

But much more important, surely, is the complete lack of any Labour vision for Scotland. The SNP and Greens – the two parties who are up in the polls* both outlined ambitious plans for Scotland, a renewables capital of the world, at the cutting edge of new industries, outward looking and assertive of our belief in justice. Labour attempted to scare people with their bogey-men. They told us that we must send everyone carrying a knife to jail. They told us that the SNP would separate the UK, making us carry a passport if we want to visit our English grannies.

And I think the failure of this strategy must surely consign the focus group politics of Philip Gould to the dustbin of history where it belongs.

Because Labour did not, surely, headline with these policies because they are passionate about them. Iain Gray is a former Oxfam staffer who got into politics to fight poverty, surely? Given how moronic their policy of mandatory imprisonment for carrying a knife is (what better way to increase crime than lock up loads of 18 year olds for a few months?), I’m not even convinced that Gray believes in it. No, it takes a Richard Baker sized idiot to think this kind of policy will work.

Similarly, Labour know full well that the SNP won’t get independence without a referendum, the answer to which will most likely be “no”.

Nope, they didn’t shout about these things because they are what motivates their candidates to get up at 5am and campaign till midnight. I’m almost certain Labour emphasised these policies because that’s what their focus groups told them to do. And the problem with campaign by focus group is that it doesn’t tell you how a policy contributes to the broader narrative of your election campaign. So, it may be very popular to shout about knife crime – I’m sure Labour paid good money to be told that it is. I’m also sure that shouting about independence is, on its own, a populist thing to do.

But when you put these things together, and add in a little more fear mongering. And when you refuse to give any kind of vision at all, you fail to inspire anyone. And so, when faced with parties with some positive vision, you lose.

But this lack of vision isn’t just about rhetoric. It is, surely, a broader problem for the centre/centre left. The fallback on focus groups may be justified by Philip Gould’s argument that this is what democracy is, but surely this argument is a cover for something else – for a floundering lack of ideas.

Labour politics, like the politics of many of the European social democratic parties (and of America’s Democrats), grew over the 90s and 2000s to accept the idea that it is the role of the state only to redistribute the wealth generated by the free markets of neo-liberalism. This model largely failed – wages didn’t rise, happiness went backwards. It was propped up by private debt and a housing bubble, while in truth wealth transferred from the majority to a mega-rich minority.

And we now find ourselves in the extraordinary position that, 3 years after the near collapse of Western capitalism, central and Western Europe is governed almost comprehensively by parties of the right. From the Russian border to the French Atlantic, social democrats have been forced into opposition. Only Scandanavia, the Balkans and Iberia retain social democratic governments.

And many of these counties have seen an equally marked rise of other left parties. Green Parties in particular have had particular successes in Germany and France as people stumble around for some sort of alternative. In Canada this week, the new left New Democrats finally overtook the centrist Liberal party and their Greens got their first MP.

And so if Europe is to build a new progressive consensus, then surely these centre left parties must look at Scotland, and look across Europe, and see what happens when supposedly progressive parties fail to inspire, fail to build a vision, and fail to argue every day for that vision.

As Scottish Labour have discovered – like the German SDP, the Canadian Liberals and the French Socialists, other parties will take your place. Whether SNP, NDP or Green, there are always people willing to claim the crown of these failed representatives of the left.

While these new recipients of left votes are not all as progressive as we would hope, they do all radiate a sense of newness, a sense of positivity, a sense that tomorrow can be better than today. For that, surely, is what being progressive is about. And unless Labour can re-learn that, there will be plenty of us waiting to retire this failed old party, and to build Europe anew. And as people in Scotland go to the polls today, it seems they will send exactly the same message.

*though I don’t want to jinx this – Greens have been consistently up in the polls, but sufficiently within the margin of error that anything could happen.

Greens to enter government in Scotland after members back cooperation deal 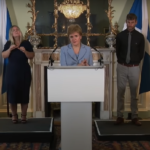