Dick of the Year – The Landlady of the John Snow Pub, Soho

This is a nomination for the Bright Green dick of the year award 2011 from Matt Butcher. To nominate your own candidate, please email 200ish words to editors ‘at’ brightgreenscotland.org

It may seem unusual to nominate a publican for Dick of the Year but this particular lady (whose name I cannot find) thoroughly deserves the title.

It was back in April when Jonathan Williams and James Bull were happily chatting and, excitingly for a first date, kissing the night away at The John Snow pub in Soho. The sparks were, however, quickly to be extinguished. They were asked to leave the pub by the landlady who claimed they were upsetting the customers. Their kissing, it seemed, had caused offence.
The problem wasn’t that they were chewing off each others faces- by all account they were being pretty tame. The problem was that both of the people kissing were men.
In the end the pub got it’s comeuppance when 100s of people descended a few days later for a ‘mass gay kiss in.’ The pub had to shut for the night as rainbow flags and pictures of half naked men were stuck to the doors and windows.
But despite the fun and games afterwards the importance of standing up to bigotry still remains. I think that a lady who kicks people out of her pub for being gay deserves to be Dick of the Year. Don’t you?” 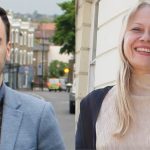 “What history have they got?”