When a Bright Green editor texted me to ask if I would write a few hundred words on Hillsborough today for the website, I stared at a blank screen for hours, and all I could think was: where to fucking start?

This is my attempt. I apologise for the rambling.

I could write a few thousand words on any single aspect of the Hillsborough disaster 23 years ago; why a huge FA Cup semi-final between two of the then biggest clubs was held at a thoroughly inadequate ground; the fateful decision by the South Yorkshire police to open a turnstile and allow thousands of fans to push into the single central Leppings Lane pen, crushing those at the front; the lack of leadership and confusion shown by the South Yorkshire Police through the entire disaster; the Sun…

But, then, I would be telling you nothing you shouldn’t already know about that terrible day. Other sources will give you a much better account of what happened.

The grieving process for the loss of a loved one has the objective of enabling and allowing the grieving person to accept the loss and ultimately move on with their life; never forgotten, but finally at peace with their loss.

When crucial stages of that process are carved out and removed for the sake of saving the skin of those responsible for the loss, it is an outrage. And when then, after denying the relatives any knowledge of why their loved ones were allowed to be crushed to death, and allowed by whom, for the blame to then be rounded right back on the dead and dying victims themselves, then it is monstrous.

I was nine years old in April 1989, and as a good Kopite in a Liverpool FC household (the neighbours on both sides were Toffees, and had gone to Villa Park for the other semi-final against Norwich) I was glued to our small TV in Merseyside. I don’t really remember much of the actual footage. I do remember thinking something must be wrong because my Dad shut up his butchers in the Liverpool suburbs early and arrived home in tears. I never saw my dad cry, before or since.

I remember visiting Anfield a few days later with my Dad and seeing the enormous mile long chain of football scarves stretching across Stanley Park, from the gates of Everton’s Goodison Park all the way through the Shankly Gates at Anfield to the Kop. I remember the endless rows of flowers on Anfield’s turf, and Liverpool manager Kenny Dalglish and players John Barnes, Alan Hansen and the rest over the next few weeks going to funeral after funeral. After funeral. After funeral.

There’s one memory that looms in the corner of my childhood from then that even now reduces me to tears whenever I stop too long to think about Hillsborough. Among all the flowers and tributes were, in the corner of the Kop, placed purposefully on the front concrete steps, two oranges. Just two oranges, on their own. My Dad had to explain to a nine year old that this was where two young friends stood at every single Liverpool home game, always bringing with them a couple of oranges to eat at halftime. They were there because, from the 15th April, 1989, one of the oranges wouldn’t be needed anymore.

What followed one of the worst disasters in British peacetime history was a cover-up just as great, as the South Yorkshire Police, with the pliant cooperation of the British media and a Tory politician, scrambled and squirmed to quickly shift the blame from those at fault onto the dying or dead victims. After all, the people dying on the Hillsborough turf were only working class Scousers, already vilified and shat on for a decade by an aggressive Tory Government and its media cheerleaders.

Yes, the logic must have gone, the British people would be much more likely to happily believe in another round of scouser-bashing than they would the police could be at fault. Liverpool was a city already under attack by the Tories – mass unemployment, disgusting levels of poverty, the Toxteth riots, total and unyielding blame for the Heysel disaster a few years previous. Nobody would likely question that Scousers were at it again.

Because of the heroically dogged and doggedly heroic Liverpool MPs Andy Burnham and Steve Rotheram, we now know the truth; that blood tests were taken of dead fans to check for alcohol levels, friends and family of the dead at the ground were aggressively interrogated about how much alcohol they had drunk; background checks on the dead 96 were carried out so as to further denigrate their name; junior officers’ reports were changed to load blame on the fans.

As we’ve said for 23 years, alcohol or violent behaviour was never, ever a factor.

And the Sun. Ah yes, the Scum. We need not go into that front page. It has now become clear that the source of the lies came from South Yorkshire police and local Tory MP Sir Irvine Patnick briefing the Sheffield-based news agency Whites.

When the furious backlash to the Sun erupted in Liverpool, News International realised that they’d just cut off a large chunk of its working class readership. It’s said that the editor responsible for the ‘THE TRUTH’ headline, Kelvin MacKenzie, called up Kenny Dalglish and asked what he could do to repair the damage. Kenny replied that the next day the Sun should print on the front page, in a type as big as the original headline, ‘WE LIED’ and hung up. Sales of the Sun never did recover, and probably never will in Liverpool.

And then, just to keep the establishment’s story true and on course, there’s B*ris Johnson’s fact-checked and evidence-based 2004 Spectator article:

(There) is no excuse for Liverpool’s failure to acknowledge, even to this day, the part played in the disaster by drunken fans at the back of the crowd who mindlessly tried to fight their way into the ground that Saturday afternoon. The police became a convenient scapegoat, and the Sun newspaper a whipping-boy for daring, albeit in a tasteless fashion, to hint at the wider causes of the incident.

So what more is there to say, now? As a Liverpool fan, Hillsborough is in my DNA as much as Rome 1977 and ’84, Istanbul 2005, Shankly and Bob Paisley, the ‘JESUS SAVES (and St John gets the rebound)’ graffiti on a local church outside Anfield, and Robbie Fowler’s Support the Liverpool Dockers t-shirt.

We went to the Hillsborough Justice benefit gig at Anfield in 1996. We chanted ‘Justice!’ until our throats were sore. We danced and cried and sang along with Trevor Hicks (who lost two daughters at Hillsborough), the Manic Street Preachers, Lightning Seeds, Space and the Bootleg Beatles, the squad of LFC, John Peel and the London Community Gospel Choir to You’ll Never Walk Alone.

We spent a never-planned quiet minute at the Hillsborough Flame tucked outside the Shankly Gates at Anfield before every match we went to.

We went to ex-Red John Aldridge’s last game before retiring from playing at Tranmere Rovers; Aldo, a local Liverpool man who barely recovered from seeing 96 fellow Scousers crushed to death in front of him. Tranmere’s Prenton Park was as full of LFC as Tranmere shirts that day.

Now, though, most importantly, just 23 years too late, maybe the families of those who died, and the City itself, can at last move into and past the final stage of grieving, for how can as intimate a community as Liverpool not react as one when almost 100 of its sons and daughter are ripped murderously from her heart?

Liverpool fans, Scousers, it can categorically now be stated, were not to blame for 96 people not coming home from a football match.

The South Yorkshire Police, the British media and the Tory government all conspired to shift the blame firmly onto the dead and away from the Force. Shame on them.

Of course, if the blame doesn’t lie with the fans, then were does it lie? And if it is with South Yorkshire Police, then who specifically? Surely the man in charge at Hillsborough on 15th April, 1989, right?

I hope this ruling makes life on the golf course a bit more uncomfortable for ex-Chief Superintendent David Duckenfield. And I hope that one day, waiting for him to finish his 18 holes, in the clubhouse two uniformed officers will ask him to accompany them to the local police station to help with their inquiries about an incident 23 years ago.

I watched David Cameron’s speech today with a bunch of Unionists crowded around the little TV at the UNISON stand at the TUC in Brighton. Through bleary eyes I saw a hulking FBU man from Liverpool listen to the harrowing evidence with his hand over his mouth and tears in his eyes.

For the record, recorded here as Steve Rotheram MP ensured they be recorded in Hansard: 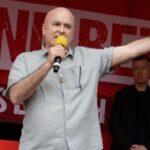 Over 500,000 people sign up to Enough is Enough campaign

Matt Hanley is a UNISON Organiser and is Trade Union editor at Bright Green. He also supports Tranmere Rovers.
View all posts by Matt Hanley →

« Party leader Salma Yaqoob resigns from Respect
Where is gender in our economic justice? »