The Queen was not fit to be our Head of State during this debate. But what will we do with the castles? 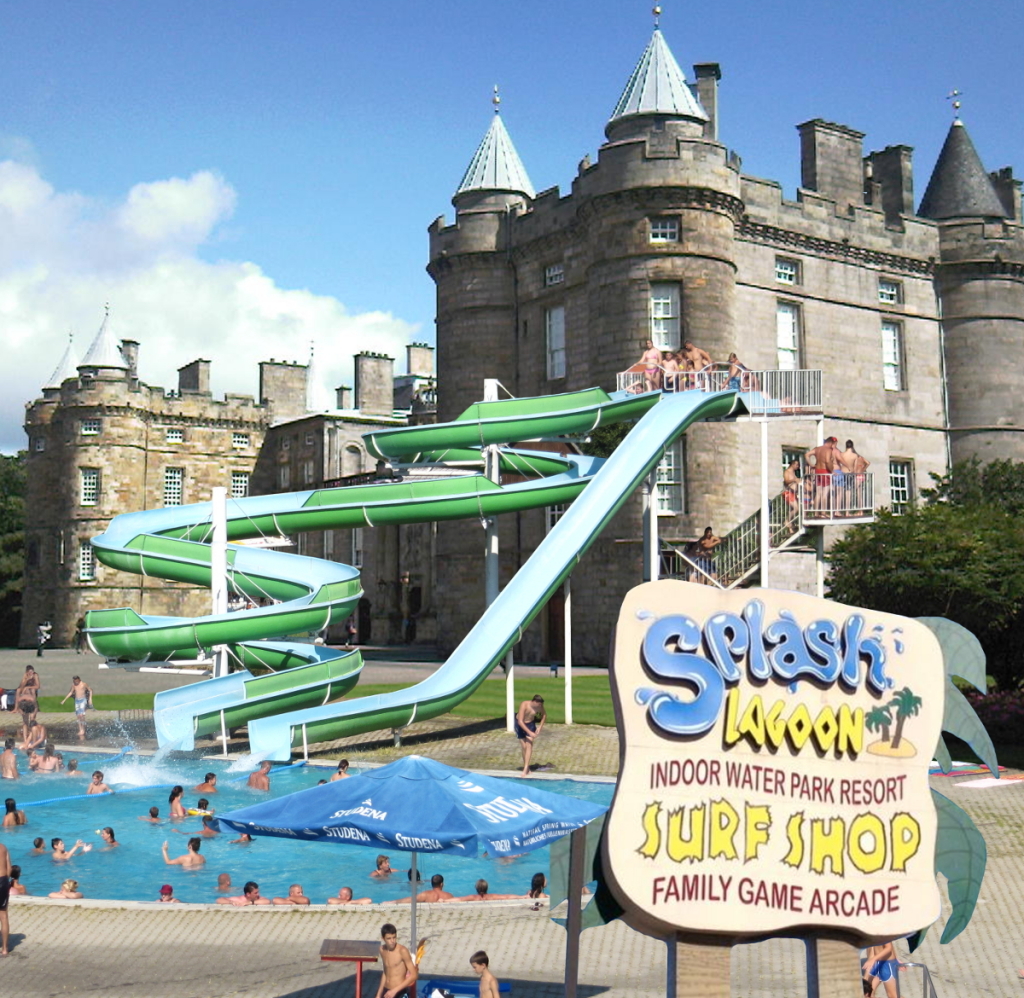 Buckingham Palace, which, due to the embarrassing state of Britain is somehow still a relevant institution in this day and age, has always maintained that the Queen was neutral and “above politics”. This has been said repeatedly over the last month.

We know, of course, that a Head of State can never be “above politics”. This is a naïve concept at best and at worst a deeply damaging one. The Queen has also shown that, being as she is, a human being who does make public appearances and interventions, “neutrality” is essentially impossible.

Through various ill-considered incidents during this debate, culminating in this week’s news of the Queen “purring down the phone”, we now know very clearly that the Queen doesn’t want to be the Scottish people’s Head of State, however we choose to organise ourselves: she wants to be the Queen of the United Kingdom.

Support for continuation of the hereditary head of state is assumed to come from a majority of Scots. However insights from the debate may provide us with the tools we need to change this assumption. It seems likely another referendum on independence might not be too far away. If so, we should make it a referendum for a republic.

Based on the clumsy manner of the Queen’s interventions it seems reasonable to assume that Buckingham Palace thought our Scottish debate mostly irrelevant. There have been three incidents of intervention in the last month which are worth considering.

“The Queen is a unionist” 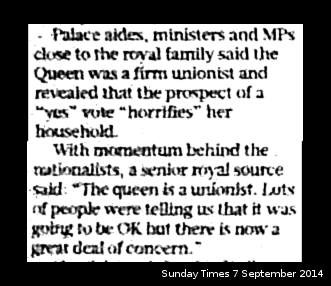 On 7th September the Sunday Times front page (the same page that broke the earthquake 51% Yes poll) carried the headline “Queen is horrified by possible break up of UK, claim palace aids”. In the story we are told “senior royal sources say the Queen is a unionist”, and that “palace aids, minister and MPs close to the royal family said the Queen was a firm unionist and revealed that the prospect of a “yes” vote “horrifies” her household.”

The qualifier, “it is a matter for the Scottish people” is offered, an identical phrasing to that used by the American President earlier in the year. But of course the Queen isn’t a casual by-stander – she the the Queen of Scotland.

What goes very deep for me is the implication, through taking sides in this way, that the Queen would be somehow uncomfortable being head of state of an independent Scotland.

Did her views impacts much on the debate on the ground? Possibly not. But this clearly shows the palace taking sides and as such is a breach of constitutional protocol with damaging ramifications. If we can hear her views on a referendum, why not a General Election? In fact it doesn’t take logic to conclude that if the Queen is a unionist she isn’t much of a Green or SNP supporter. That might not be new information, but the point is we are not supposed to hear from our “neutral” Head of State.

On Sunday 14th September the Queen said to a “well-wisher outside church near her Balmoral estate” that “she hopes ‘people will think very carefully about the future’ ahead of the Scottish independence referendum.”

Incredibly, despite the supposedly high profile sources telling us the queen is a unionist, the reporting of this arguably neutral statement received far more coverage than the previous week’s outburst. It was a stage managed attempt to show the Queen actually gave a crap about what people did up here in Scotland, and the press lapped it up.

Purring down the phone 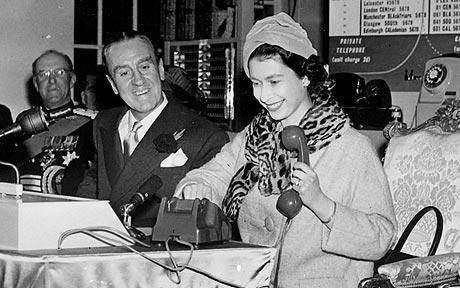 On Tuesday, speaking to the ex-Mayor of New York City Michael Bloomberg, our Prime Minster said the following:

“I think the definition of relief is being Prime Minister of the United Kingdom and ringing the Queen and saying “it’s alright, it’s ok.” That was something. She purred down the line. I’ve never heard anyone be so happy.”

There are lots of things that offensive about this incident: the causality with which the Prime Minister reveals private conversations, the images and sounds it conjures up in our minds… I can’t help but be baffled by the revelation that she only knew the result when the Prime Minister personally rang her up. Once again we given a clear illustration that the Queen didn’t want to be the Scottish people’s Head of State, only a United Kingdom would please her.

Today the Prime Minister is due to personally apologise to the Queen for what amounts to saying embarrassing things about her to random statesmen and TV cameras.

But where’s our apology from the Queen?

Intentionally and by accident the Queen did intervene in this debate and in doing so further reminded us that a human who speaks is not capable of being “neutral” and “above politics”. According to her own standards, the Queen was not fit to be our Head of State during this debate. We might conclude that her job description is was never possible. The post needs a rethink.

Going into this debate around half of Scots, a clear majority, supported the retaining a Queen as Head of State. Now the referendum debate is over we know that she didn’t want the job, and hasn’t been performing well in her current one either.

If there is, as seems very likely, another referendum on independence within the next decade, we need to be prepared to fight for a better settlement. The job of Head of State is quite important, and shouldn’t be passed down from mother to son. This debate has shown us clearly that the Head of State is always political, and if we are to live in a true democracy, must be chosen by the people.

So we’ll wait for our opportunity. In the mean time we’ve got some planning to do. We have two royal palaces in Scotland and the Balmoral Estate. What should we do with them?

After the sad closure of Leith Water World back in 2012 presumably the most obvious use for Holyrood Palace is as a water park.

But what of Balmoral Castle, and its beautiful 159km2 estate (1)?  A Princess Diana Memorial Theme Park has been proposed (see short film, below) and the palace, beautifully set in the Dee valley, would make an excellent backpackers hostel. Get thinking.

1. To read more about the ownership of Balmoral read Andy Wightman’s excellent blog on the subject from 2007.

« The Scottish left needs to talk about collaboration, not another party
Why I’ve complained to House of Commons Library »