Assisted dying: choice for whom?

Choice and control are key principles of the disabled people’s movement. They are also principles adopted by those campaigning for Assisted Dying legislation. But choices aren’t made in a vacuum, and I would like to suggest that the choice advocated by those supporting assisted dying is actually only real choice for those who already have a large amount of control – not an increase in choice for those who are currently disempowered.

We have two models for legal euthanasia: Oregon and Europe (in the Netherlands, Switzerland, Belgium and Luxembourg). We like to look to Oregon, with its well-defined set-up based around consent, and clear definitions of eligibility. But even there things go wrong – look at the cases of Barbara Wagner or Randy Stroup, who were both offered doctor-assisted suicide over treatment for cancer. Additionally, according to the monitoring report, ‘inadequate pain control or concern about it’ was cited as a concern by only 23% of those who used assisted dying – while becoming a ‘burden on family, friends/caregivers’ was 40%. The most common three reasons given were ‘losing autonomy’ (91%), ‘being less able to engage in activities making life enjoyable’ (89%) and ‘loss of dignity’ (81%). Crucially, those three are all likely to be disability rights issues with potential solutions other than death.

Similarly, we like to distance ourselves from the European model where variously children of any age with terminal illness, adults who have psychiatric conditions, dementia or ‘interminable suffering’ – as well as those who are terminally ill – are able to access assisted suicide or euthanasia. Advertising has been used in some of these countries to attempt to normalise the choice to end one’s life. Ironically, given the argument that Assisted Dying legislation creates equal access for disabled people, the Exit and Dignitas clinics visited by Liz Carr (who uses a wheelchair) do not have disabled access.

Despite the current bill going through parliament being predicated on the Oregon model, however, there are signs that it would not be the end of the road. One member of the House of Lords, for instance, said his mind had been changed in favour of the issue after hearing the case of Tony Nicklinson. However, Tony Nicklinson was not terminally ill and would not have been covered by the current bill. Similarly, campaigners such as Terry Pratchett would not be aided by the legislation intended in Lord Falconer’s bill.

Many people dismiss ‘slippery slope’-style arguments, but they perhaps also forget that disabled people who protest Assisted Dying legislation are not drawing on a hypothetical argument. Within living memory, hundreds of thousands of disabled people were murdered in euthanasia programmes in Germany, following publicity campaigns arguing that disabled people cost additional money and resources. I very much hope that this is unlikely to happen again – but it is not without precedent. What may be more likely, however, is a more insidious form of pressure couched in the language of choice. Let me explain.

Today debates take a different angle: disabled people as scroungers, fakers and skivers. This kind of reporting may be linked to the increasing numbers of hate crimes reported by disabled people. In green circles, meanwhile, (as well as more mainstream contexts) discussions are of increasing populations and decreasing resources. Similarly, individualism and self-sufficiency are highly prized in our society.

All of these ideas may influence perspectives on who or what constitutes a burden. They also may affect a person’s perspective on whether or not they are a burden – particularly if they are in difficult financial circumstances (and let’s not forget that disability benefits, even for those who are evidently terminally ill, are currently in disarray). In this context, it is not difficult to imagine that assisted dying, instead of challenging this perspective, will lead to increasing pressure on people in already difficult circumstances. To me, this doesn’t seem like choice at all.

Personally, I have no fundamental objections to the principles of Lord Falconer’s assisted dying bill. But currently it is being championed primarily by those with a significant amount of privilege, and many debates discuss issues of disability rights (such as dignity in being assisted to use the toilet) in very disparaging terms. Many disabled people live lives of dignity in a context of interdependence – but this has been massively eroded by coalition benefits cuts such as the planned closure of the Independent Living Fund, which was already not adequate to meet demand. All of these issues persuade me that campaigning on the current bill may have the effect of reducing, rather than increasing, choice for those who come under its remit.

Post script: I find it particularly troubling that at a recent parliamentary debate on the issue, disabled people protesting the bill outside were subject to intimidation, harassment and abuse by (non-disabled) pro-bill campaigners. This to me implies a level of disrespect for disabled people which is especially concerning given the points made above. 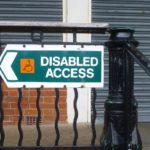 Why accessibility is so important

Debs is a Social Justice Co-Editor of Bright Green and writes on equality and social justice issues. Based in Leeds, she is currently pursuing a PhD exploring disabled people's access to sustainable lifestyles.
View all posts by Deborah Fenney Salkeld →