A few years ago, I didn’t have a big opinion on the Greens. I thought they were your average, well-intentioned but a wee bit boring cuddly liberals who loved polar bears and wind turbines. Of course, they DO love polar bears and wind turbines, but they also talk good sense on tackling the stomach-churningly huge levels of poverty, exploitation and inequality that blights Scotland. So, I’ve decided to vote for them – this being new to me. In all previous elections I’ve voted SNP, but these days I’m tired of their centre-wards drift, timidity and embrace of triangulation. So I’m giving the Greens a shot. Not that I share ALL their politics by the way – I’m personally more into violent insurrection and bourgeoisie-bashing to achieve the radical change we need, but as far as electoral politics goes, the Scottish Greens are pretty sound. Here’s why I’m voting for them.

Firstly, on constitutional matters. The Scottish Greens are pro-independence. I’m honestly not too enthused by constitutional politics overall (I prefer social justice issues), but the thought of Scotland being free and not hosting death-inducing nukes and having a welfare system that actually helps people makes me very, very excited. Perhaps I’m a closet nationalist after all. I’m therefore glad to see the Greens support indyref 2. The sooner we can escape Westminster and all the heartless Tories, brainless Labourites and spineless Liberals that infest it like rats, the better. But I’m not going to delude myself by thinking an independent Scotland will be inherently more left-wing; it won’t. But it gives us the opportunity to empower Scots in a way that seems unimaginable under the current set-up. The Scottish Greens also want a Scottish currency, a Republic, and the citizens-lead creation of a constitution. All that sounds pretty good to me.

Secondly, let’s talk about poverty and inequality. The Scottish Greens are the most progressive on taxation. They aren’t going to let obscenely rich fuckers at the top hold us to ransom and threaten to leave if we DARE increase their taxes – they’ll make the wealthiest cough up on a (actually very reasonable) 60% top rate of income tax. That’s fair. Middle earners would also be asked to contribute a bit more. The revenues from this won’t just be used to fund Scotland’s beleaguered and under-resourced public services, they’ll also help reduce the chronic income and wealth inequality that plagues our society. And thankfully, they’re not going to screw over low-paid people. People who earn less than £26,500 a year (i.e. me) will be paying LESS tax – which is nice. They’ve also pledged to replace the fousty old Council Tax which is hellishly unfair with an up-to-date residential property tax; although ultimately, they’ll introduce a Land Value Tax. Also, the Greens support a £10 an hour minimum wage, rolling back punitive cuts to benefits, formally abolishing the Bedroom Tax (an evil policy designed to bully disabled people into smaller houses), and banning workfare the sanctions regime. In the long term they also support a Citizen’s Income –  a weekly payment to everybody – to help reduce financial insecurity, but also the stigma attached to getting weekly giros from the government. The Greens stand out as particularly great on housing too – they want to stop private landlords running riot and introduce tenant protections and strict rent controls, so that Edinburgh and Glasgow won’t be socially cleansed by rich incomers, as is happening in some areas of London.

Of course the Scottish Greens are the best party for environmental issues. Unlike the SNP, which bleats out a well-rehearsed line about taking a cautious and evidence-based policy towards fracking, the Scottish Greens want to ban it. And thank fuck. All the evidence, from places like America and Australia, proves that fracking is destructive. It causes earthquakes. It reduces air quality. It taints the water supply – and considering Scotland has the tastiest and freshest water ever, why the hell would we put that at risk? Especially as fracking will not remotely benefit ordinary people… moreso only the big energy companies, who’re happy to sacrifice Scotland’s beautiful environment in the short-term pursuit of making a profit. The Scottish Greens are also thinking long-term and want to begin the transition from an oil economy to one dominated by renewables. They know, if there’s a hope in hell of saving our planet from climate Armageddon, we’ve got to leave the rest of the oil and gas in the North Sea; the alternative (depletion of the ozone layer) is too unthinkable. Sadly, the Scottish Government are committed to maximum oil extraction, but the Greens have got plans to create hundreds of thousands of well-paying jobs in green technology, decommissioning North Sea oil infrastructure and reforesting Scotland’s barren interior. The Greens also have a long-standing and radical policy of insulating every home in Scotland – doing so would generate lots of jobs, reduce carbon emissions and cut people’s sky-high fuel bills, which I think demonstrates just how interlinked social, economic and environmental justice are! Lastly, the Greens are against the air passenger duty cut. There’s a lot of populist trash talked about this; but frankly, it will only benefit wealthy frequent flyers and increase air travel, which is unbelievably destructive. Instead of cutting airline taxes the Greens would invest in affordable public transport, integrated and well-regulated.

Foreign policy is not really relevant to this election, as it’s (sadly) reserved to Westminster. But nonetheless the Greens have published their ideas and ambitions for Scotland’s role in the world – and I was pleasantly surprised! Whereas most of the UK left has been infected with totally irrational Russophilia and Putin-worship, the Greens support sanctions on Russia for her poor human rights record and imperialist adventures in Ukraine and Syria. They also support self-determination for Kurdish people, and would recognise the State of Palestine – as well as boycotting Israel for her indiscriminate military attacks, evil walls of separation and racist system of segregation. They also want to scrap Trident nuclear weapons and leave NATO, meaning Scotland can have a human rights-driven, peace promoting foreign policy, free from the yucky tentacles of Washington DC. They also want to increase our humanitarian aid and climate conservation budget. I’m really pleased at all this stuff as it demonstrates the Greens have a foreign policy motivated solely by human rights and proper justice, not ideology. They also support Scotland’s EU membership, which is good – they know the Tories can’t be trusted with workers’ rights or the fate of Polish families living in Scotland.

There are many other reasons why I’ll be voting Green. Their support for sex work decriminalisation. The fact they aren’t boring old statists and want powers decentralised as low down as possible. Their progressive LGBTIQ+ policies. Their refreshing support for the arts and creative industries, rather than putting them first on the chopping block for cuts. Their support for drugs law reform – I sound like a broken record, but decriminalising drugs and actually supporting addicts would solve SO many problems, and the Greens recognise this.  Their refusal to pander to irrationality on immigration, and their support for asylum seekers and refugees in Scotland. Their support for workers’ cooperatives so that people aren’t at the behest of their exploitative bosses. Their emphasis on community policing and restorative justice. All of that stuff appeals to me greatly – plus, high-ranking Greens like Patrick Harvie and Maggie Chapman are lovely and inspiring people who I know would make great MSPs. So that’s why I’m voting Scottish Green on May 5th.

This article was originally published in Ruth’s personal blog. 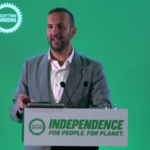 Ruth Mawere is a 27 year old Zimbabwean living in Glasgow. She is a fierce feminist who wants to overthrow capitalism and smash the prison industrial complex.
View all posts by Ruth Mawere →