An open letter to the labour movement: support the strike, don’t cross the climate picket line 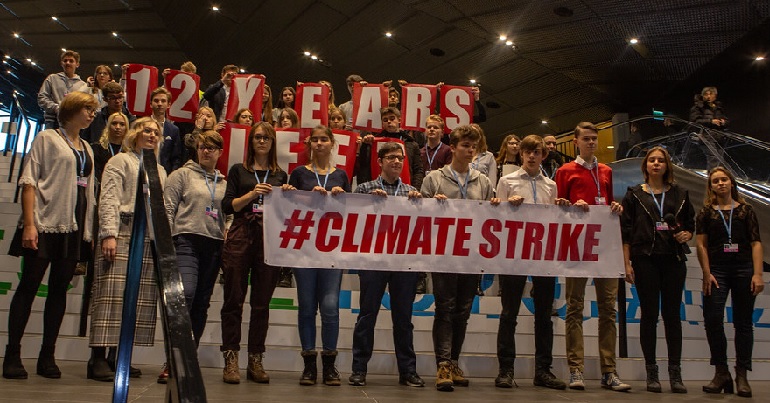 On 15th March 2019, from Scotland to South Africa, an estimated 1.4 million children and teenagers skipped school to participate in the global youth climate strikes. As the world’s youth gear up for another round of strikes today, I have a plea for the labour movement: don’t cross the picket line.

1.5 degrees of warming is the limit – the planetary picket line – that we must not cross. For years, poorer nations have repeatedly stressed ‘1.5 to stay alive’ at the UN climate talks, highlighting the existential threat of climate breakdown.

Rising temperatures are already causing havoc around the world – In 2018 alone, as many as 62 million people were directly affected by climate change and extreme weather events. When Cyclone Idai hit Mozambique, Zimbabwe and Malawi in March, it killed over 1,000 and displaced thousands more; earlier this month, Cyclone Fani caused similar devastation in India and Bangladesh. Already, corals are bleached, species have gone extinct, the ocean is turning to acid. Yet if we don’t change course, our current trajectory puts us on course for 3-5 degrees of warming by the end of the century.

Before the vote on Heathrow’s third runway last year, leaders of five of the UK’s biggest unions, Unite, TUC, BALPA, Community and GMB, authored an open letter advocating airport expansion. Lining up alongside business figures, they claimed at the time: ‘a third runway at Heathrow – one of the biggest construction projects in Europe – answers the demands of many members across the UK – for more skilled, well-paid and sustainable jobs.’ Subsequently, while Jeremy Corbyn and John McDonnell opposed a third runway along with other members of the Labour frontbench, the party’s MPs were given a free vote and a majority voted with the government to greenlight airport expansion.

Why is the climate picket line so casually ignored? Solidarity and internationalism are professed core values of the labour movement, yet when it comes to an issue of our very collective survival there appear to be selective blind spots.

It’s not only airports – Unite has called for state support to prolong the life of the North Sea’s oil and gas industry, and GMB union is an outspoken proponent of fracking. Let’s be clear, prefixing the ‘job’ with the word ‘sustainable’ doesn’t make it so. By expanding these industries, you are locking in a destructive economic model, pumping more carbon into the atmosphere, and delaying the radical transformations necessary to secure a habitable planet.

Holding out for the prospect of a liveable future should not be a sectional interest. Last February, I stood on a freezing cold picket as part of the UCU strike for fair pensions. I was inspired by the sense of camaraderie generated through days spent together in the cold, and heartened by the vast majority of staff and students who stood with us in solidarity, refusing to cross the picket line.

Yet this experience also prompted me to reflect on the meaning of a picket line at a university in the digital age – as a device to disrupt ‘business as usual’, win concessions from the powerful and jolt us into action. The picket line is becoming deterritorialised, irreducible to a physical boundary.

With regards to the climate, it demands we show solidarity not just with members of our immediate community, but to ‘distant others’ – be they Pacific islanders, Honduran peasants, or future generations. In the industrialised nations, we’ve already blown our share of the carbon  budget – every tax break awarded to the oil industry, every dirty infrastructure project that gains approval, is another step over the picket line.

Sure, fears of job losses are understandable, and yep, no doubt the climate movement has previously fallen short in its consideration of how green policies might affect workers in polluting industries. But that is not the case now. There is a radical climate justice movement ready to support workers transition to well paid, low carbon jobs and prioritise structurally disadvantaged and neglected communities over the whims of corporate bosses.

Moreover, there have been many laudable attempts to breach this divide within the labour movement, the establishment of the International Trade Union Confederation’s Just Transition Centre in 2016, and the successful passage of the Trade Union’s Congress motion on climate action and energy democracy the following year being two notable examples.

The ‘Ready for Renewal’ campaign, spearheaded by GMB, Unite and the Scottish Trade Union Congress, has won wide support from MSPs and environmentalists in its efforts to save offshore wind construction jobs in Fife, a promising sign for the future. Yet we also have to get real about shutting down the industries which are putting that same future in jeopardy. Spain’s recent closure of its last remaining coal mines points the way forward. The phaseout was rapid, but undertaken in consultation with unions to ensure miners could retrain to new industries or retire on a decent pension.

Proposals for a Green New Deal have injected new ideas and urgency into these debates, and creative alliances are being forged. There is much common ground emerging, around democratic ownership of energy, a just transition to renewables, a shorter working week, and a greater emphasis on recognising and valuing (low carbon) social and care work.

More exciting still, there is a renewed commitment to internationalism and the beginnings of honest discussion of how to break away from our broken and destructive economic model, predicated on debt fuelled consumption and the ongoing theft of resources from the global south. Just as solidarity cannot be confined to one workforce, it cannot be limited to one nation or remain within arbitrary national borders.

A wake up call

The youth climate strikes and Extinction Rebellion protests have served as a wake up call that ‘business as usual’ – sleepwalking into disaster through more airports, more roads, more dirty energy infrastructure – is not an option. In response, the Committee on Climate Change (CCC)’s groundbreaking (if still inadequate) net zero report, combined with Parliament’s declaration of a Climate Emergency, present an unprecedented opportunity for change. Yes, the rapid restructuring of our economy will be disruptive and unsettling, but it also holds out the possibility of forging a more just and egalitarian future.

So I urge the labour movement to recognise the stakes. Don’t scab on the youth. See the planetary picket line. And make a decision: which side are you on?

Benjamin Brown is a researcher and campaigner with a current focus on energy justice and climate politics. He tweets at @_dead_reckoning
View all posts by Benjamin Brown →

« Green MEP candidate: There are many problems in our country, but Nigel Farage isn’t the answer
Renewable energy company becomes first business to declare a climate emergency »