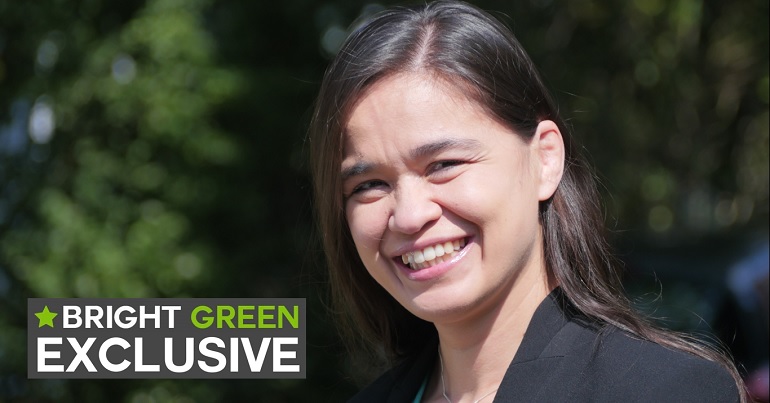 Solihull councillor Rosemary (Rosi) Sexton is standing to be the next leader of the Green Party of England and Wales, Bright Green can reveal. Sexton was first elected as a councillor in 2019, and stood for the Solihull constituency in December’s general election. She is the Solihull Metropolitan Borough Council Green group spokesperson for adult social care and health.

Sexton is centering her campaign around sharpening the party’s electoral strategy, formulating evidenced based policy and making the party more inclusive.

In announcing her candidacy, Sexton is the first challenger to incumbent co-leaders Sian Berry and Jonathan Bartley. Berry and Bartley announced they were re-standing for the leadership on June 8. The pair have been co-leaders together since 2018, with Bartley also holding the co-leadership with Green MP Caroline Lucas from 2016-18.

Speaking to Bright Green on her candidacy, Sexton described herself as an “outsider” and an “underdog”. She said:

From my earliest experiences as a mixed-race child in a mostly white neighbourhood, to my time as a woman in male-dominated professions, I’ve always been an outsider. As a relative newcomer to Green politics, I know I’m an outsider and an underdog in this leadership contest, in much the same way that the Green Party is an outsider and an underdog in the arena of British politics. This can be a difficult position, but also offers some advantages. An outside view makes it easier to look beyond the status quo, and to avoid being caught up in tribal thinking.

She also thanked Berry and Bartley for their time as co-leaders, but said that the party needed “a new approach”. She said:

Leading a political party is a huge undertaking, requiring a great deal of commitment and sacrifice. I pay tribute to Jonathan and Sian, who have carried that burden for the last two years, and recognise their hard work on behalf of the party. I believe that a fresh set of eyes and a new approach can take the Green Party to the next level.

And Sexton added that the party had a “responsibility” to be the political voice of the wider green movement:

We are not a pressure group or a lifestyle movement. We have a responsibility to be the effective political voice of the Green movement. We cannot keep expecting other ‘progressive’ parties to carry our cause for us.

Relatively new to elected office, Sexton first came to fame as a mixed martial artist (MMA), becoming the first British woman to fight in the UFC. Her MMA win loss record is 13 wins and 5 losses. Like fellow Green Magid Magid, she has a speciality in Brazilian Jiu Jitsu.

Nominations for the Green Party’s leadership team and nine other members of the Green Party executive close on June 30. Members will be voting throughout August.

« Is BP really on route to being a net zero firm?
Green Party leadership elections heat up – UK Green news round up issue 65 »