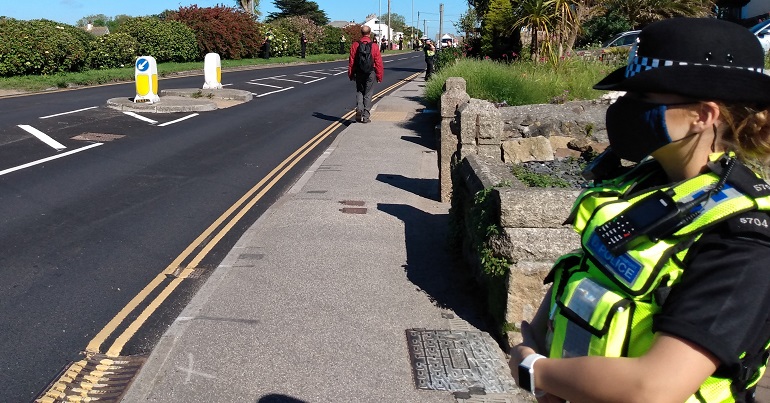 “Can I politely ask you to stop moving?”

The tone of the officer, barking at a group of young pedestrians, was anything but polite. Along the empty coast road through Carbis Bay, hundreds of people, locals and tourists, stood frozen in gateways or squeezed against hedges, surrounded by police, some of them with machine guns. We stood for about 15 minutes, unable to move before motorcycle outriders and blacked-out limousines carried anonymous dignitaries to or from the G7 summit.

I asked one of the officers how long we might be detained on the way to our (pre-booked) train home the following day. He said the longest wait had been three hours. I didn’t think to ask what powers they were using to stop people walking in front of their own homes.

I thought I was lucky, booking the last available bed and breakfast in Carbis Bay inside the security zone, close to the action, but no action by anyone except the authorities would be happening here. Instead, we spent hours walking and halting along that road to reach the XR rebels in St Ives, or the train to Falmouth, where the media circus had taken over the town.

Coincidentally, I had just completed online training on the Prevent Duty, which requires teachers and lecturers to report suspected extremists to the police. One question listed the categories of extremist covered by the duty.  Alongside ISIS, Al Qaeda and Neo-Nazi groups were “environmental extremists”. A footnote explained that some environmentalists, particularly animal rights extremists, had turned to violence. It failed to mention anything about the involvement of undercover police officers in those crimes, including firebombings. If all power corrupts, covert power corrupts more easily.

Standing by the side of the road, unable to move, gave me plenty of time to reflect on all this. When I was on trial two years ago for XR actions in London, I tried to explain to an unsympathetic judge that democracy, civil rights and the rule of law are three of the many things we will lose if we fail to stop runaway climate change. That wasn’t just my view: even military analysts were writing of “an existential threat to human civilisation.” Two years later, emissions are rising again; time is running shorter but not much else has changed.

Extinction Rebellion came to St Ives to make that point. The security cordon kept us well away from the G7 leaders, but the creativity of XR groups captured media attention and made more friends than enemies amongst the local population. Jo Flanagan, from Bristol XR, organised a few of us to pose as world leaders rearranging deckchairs on the Titanic. Images of us crossed the world from Deutsche Welle to Al Jazeera Arabic service (I was Xi Jinping in this one).  Several bystanders came over to congratulate us or engage us in conversation. One of the marches provoked an argument between a couple of bystanders. As we marched past them I heard a young woman say to her man: “that’s the difference between you and me – I care, and you don’t!”

Unlike some earlier XR actions, there was no serious attempt to disrupt the local population; the authorities had already done that far more effectively than we could have done. The few outbursts of local anger, misleadingly reported by the likes of the Daily Express, were reacting to those restrictions. In this clip, XR had not “blocked the road” – that was done by the police, who had authorised a march through the town centre.

About 500 XR supporters marched through St Ives on the Friday, about 1,000 from various groups through Falmouth on the Saturday. Negotiations to create a common front had broken down because some of the groups refused to rule out violence, which is an article of faith for XR. In fact, none of the other groups tried to use any violence – comparing their numbers to the armed police I don’t think they would have lasted very long if they had!

So how did the organisers feel the actions had gone? Melissa Carrington, XR’s regional media coordinator, said:

Well, everything we wanted to do came off.  We had a good turnout, masses of press interest. We had a really good reception in St Ives… We knew we were never going to get close to the G7 leaders; but their statements, recycling promises they’d already made were juxtaposed with our message that this isn’t good enough: we need action. They failed to deliver on climate finance. They failed to deliver anything new.

The end of summit communique agreed at the summit was, as expected, bland and unconvincing, while President Biden returned home to yet another record-breaking heatwave.

So what is XR planning next?

“On Saturday July 26, we’ll be joining a march against austerity [in London], and on the Sunday there’s a Free the Press action. We’re planning another full-on rebellion [also in London] in August. The approach will be to gather as much support from other movements to make a bigger impact – there’s been a lot of work done with allies through the Kill the Bill marches.

I wondered how the Kill the Bill protestors might react if they could have joined me trapped on the pavement between Carbis Bay and St Ives.  If COP 26 fails to stop the breakdown we are heading towards, we may all grow used to armed men ruling our streets.

Steve Melia is a Senior Lecturer in Transport and Planning at the University of the West of England, and a ‘convicted climate protester’.  Roads, Runways and Resistance – from the Newbury Bypass to Extinction Rebellion is published by Pluto Press.