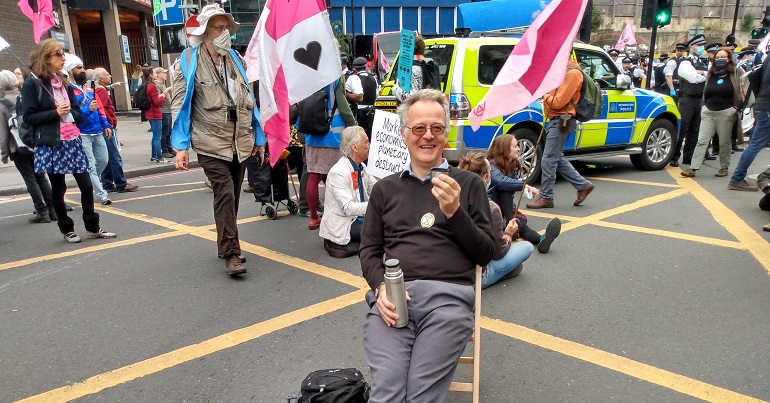 Solicitors advise people not to write articles like this. They could “prejudice your defence”, which is why you won’t find many. I have just returned from two days of protest with Extinction Rebellion in London, where I was arrested twice – correctly on the first occasion and wrongly on the second, for an offence I did not commit. In between, I witnessed things most middle class white people rarely see. This is what happened, and why I chose to break the rules to write about it.

The online message told us to prepare for a tea party, with flasks, picnic food and chairs. I brought a heavy wooden one and then discovered that we were marching to an unknown destination. I dragged it for a couple of miles until we divided into groups. Our group stopped beside the Tower of London, where two young women were sitting on top of a van blocking the road.  At last, I could unfold the chair and take out my flask, while two more groups were locking themselves to Tower Bridge and the junction by the Royal Mint.

Several hundred police marched towards the few of us still sitting in the road. A young officer asked me if I realised that I was blocking a highway (well I am sitting in the middle of it.) Could he help me in any way to desist from blocking the highway? I smiled. “You know why we are here.” A friend filmed my arrest. I was led away by two officers, who didn’t know where they were going. One of them found a sergeant.

“Do you know where the pixie vans are, Serg?”

It was good to see the police were as organised as we were.

Eventually five of us were bundled into a minibus with leather seats. The police generally behaved well but one of them was a bit more confrontational. He had handcuffed a young woman, who began to shake, kicking the floor and hitting the seat in front of her until paramedics took her away.

For my last book I interviewed people who described a strange calm descending on them as they awaited arrest; I was in one of those moments.

The central police stations were filling up, so they drove us to a remote suburb, where we had to wait in the car park to be booked in, searched and locked into cells. It’s difficult to sleep on the hard mats they provide, but I was finally drifting off in the small hours when the door opened and an officer barked “they’re letting you go.” I was actually ‘released under investigation’, which allows the authorities to take as long as they like to do whatever they want to do next.

The police told us that night buses were running but there were none in that area. Another rebel had met a black teenager who was wandering the streets asking passers-by for help. He had been arrested on suspicion of possessing a knife, brought back to the station, searched, found with no knife and released with no money, no phone and no way of getting home. He was too scared to go back to the police station, and too scared of what his parents might say if we tried to contact them. As we left in an Uber, another rebel was trying to arrange some transport home for him.

The following day I had arranged to join a stunt, a parody of the ghostbusters theme ‘Greenwash Busters’. I had work the following day and wanted to keep out of any more trouble – it didn’t quite work out like that.

Our first target was the discreet headquarters of the Koch Industries – funders of fossil fuels and the ‘climate change denial machine’ in the USA, unknown to most people in Britain, but highly influential here. Six of us with banners and a sound system were enough to close down the entire building. Police surrounded and searched us for offensive materials. Finding nothing, they allowed us to do our professionally-choreographed award-winning dance routine (OK, I was better in rehearsals).

Moving from there to the Bank of England, we were searched again – things were clearly getting heavier. One of my friends had brought a stencil and chalk spray, which leaves a temporary mark but eventually washes off in the rain. The police searched their bags and seemed content to let them spray slogans on the pavement, but I didn’t get involved in that.

We had just done our dance for the second time when more police arrived and suddenly I was in handcuffs, under arrest for “criminal damage” (maximum penalty ten years imprisonment). An unnamed senior officer had instructed them to take a harder line. They were told to “arrest the four in the middle”, oblivious to the possibility that we had moved around in the meantime. The arresting officer said he remembered a conversation with me about chalk spray, which never happened – or happened with someone else.

So who said they saw me spraying chalk? “I don’t know that – it came from higher up.” I started explaining: if you believe in the rule of law, but are driven to break it, which I’m doing because of climate change, then you do it openly. I did that yesterday; you can watch the video, but this is different – because I didn’t do it. We could take this all the way through the courts, but wouldn’t it be better to get it right from the start? Do you have any video evidence?

My friends contrasted my clean overalls with the chalk all over theirs (for which I was very grateful) and I could see doubt starting to appear on the police faces. Someone went away to consult their superiors, then as they bundled my friends into a van, an officer said quietly, almost conspiratorially: “I’ve been asked to keep you aside for a moment”. I realised that he needed my help to back down without losing face. The evidence had been reviewed. There was clear evidence for the others, but it was not so clear for me. No admission of error, but they were ‘de-arresting’ me. “Thank you officer.”

On the train home, I wondered what would have happened if that black teenager had been in a similar situation.

When you decide to take protest action it is easy to become distracted by conflict with the police and criminal justice system. There are many flaws in both – the treatment of black people is an important protest issue in its own right – but challenging those flaws was not our original intention. We were there to raise the alarm about the climate emergency and the government’s inadequate response. I could have wasted a year of my life challenging the flawed memories of police officers and the misapplication of criminal damage laws. I hope the CPS will decide that prosecuting my friends for chalking on a pavement is not a good use of public resources. If not, they will be forced to waste their time fighting that battle. I committed the first offence and if the authorities want to use this article as evidence against me, so be it. And if you have never heard of Koch Industries, take a look at some of their activities.

Steve Melia lectures on transport and planning and writes about environmental politics.  He was fined £500 for sitting on the road with XR in 2019.  His book, Roads Runways and Resistance – from the Newbury Bypass to Extinction Rebellion, is published by Pluto Press.