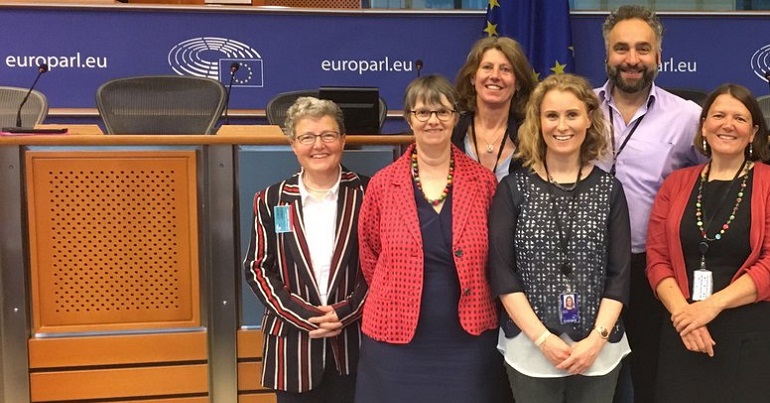 Voting is now open in this year’s Green Party of England and Wales leadership election. As expected, candidates have been releasing a flurry of campaign material today to persuade members to vote for them.

The most attention grabbing from today came from camp Denyer-Ramsay. They’ve announced that eight of the twelve living Greens who have been in either the Westminster or European Parliaments are supporting their campaign.

Green MP Caroline Lucas had previously announced her support, as had former MEP Gina Dowding. Now more former MEPs have thrown their weight behind the campaign. Alex Phillips, Molly Scott Cato and Scott Ainslie all announced they are backing Carla Denyer and Adrian Ramsay. They were joined by one of the two Green members of the House of Lords, Jenny Jones. Catherine Rowett has endorsed both Denyer and Ramsay as well as Amelia Womack and Tamsin Omond and has not indicated which ticket she will be giving her first preference to.

This represents an impressive two thirds of the living current and former Green Parliamentarians. Former MEPs Magid Magid, Jean Lambert and Keith Taylor have not publicly endorsed any leadership candidate. Neither has the Greens’ second member of the House of Lords, Natalie Bennett.

The Greens previously had another member of the House of Lords. In 1999, Tim Beaumont – a life peer – joined the Green Party and served in the upper chamber until his death in 2008.

Lucas said Denyer and Ramsay are the “winning team” and the “strategic choice of leadership contenders. She said:

We’re lucky to see an exciting contest for leadership in the Green Party right now. But my winning team is Carla and Adrian. Not only are they brilliant campaigners, they also have a track record as successful councillors, delivering real change for their communities. They are serious politicians for serious times

Crucially this is the strategic choice. I know from my own experience just what a difference it made to be leader of the Green Party when I was contesting Brighton Pavilion for the first time in 2010. Electing Carla and Adrian co-leaders both boosts our chance of winning our second MP in Bristol West, as well as embedding electoral experience and success throughout the party.

Speaking on her decision to back Denyer and Ramsay, Phillips described the latter as “strategic and thoughtful”. She said:

Adrian is the strategic and thoughtful leader we need right now. He masterminded the rise of the Green Party in Norwich, delivering unprecedented success in the city. We need his experience to deliver the next crop of Green MPs.

Ramsay said that the endorsements showed that he and Denyer are the “trusted ticket” in the leadership contest. Ramsay said:

The backing of elected Greens shows we are the trusted ticket to deliver electoral success and capitalise on the current exciting window of opportunity for the Green Party. We are inspired by the rise of the Scottish Greens and the Green Party of Aotearoa New Zealand. James Shaw & Marama Davidson, Lorna Slater & Patrick Harvie have motivated record numbers to back the Greens and have taken the Greens into government. That’s the credible and capable model of leadership we seek to follow, to win wide public support for the Green Party and our policies.

Editor’s note: This article was corrected at 20:18 on 2 September 2021 to make clear that Catherine Rowett has endorsed both Carla Denyer and Adrian Ramsay and Amelia Womack and Tamsin Omond’s leadership bids. It previously erroneously stated that she was only backing Denyer and Ramsay, and that no other candidate had received the support of a current or former Green Parliamentarian.