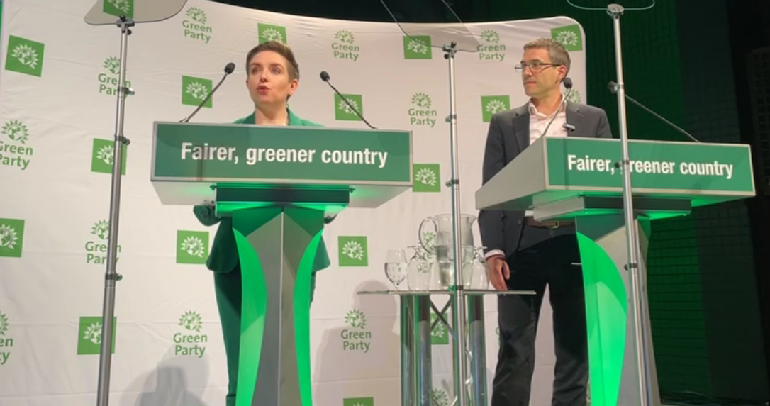 Privatisation of public services has been an “acute and painful failure”, the Green Party of England and Wales’ co-leaders have said. They made the comments in their speech at the party’s biannual conference taking place in Harrogate this weekend. Calling for water, energy and the railways to be taken into public ownership, they said this would see “the things we need for everyday life” stopped from being run “to line the pockets of shareholders”.

Denyer told the conference, “It’s not just energy we want to bring into public hands, but our water and our railways too. The current systems are out of date, falling apart, not fit for purpose. And yet bills and fares rise while efficiency plummets. For the last 40 years we have been sold a political ideology obsessed with deregulation, market freedom, and the government not interfering. Not just the Conservatives but also Labour governments have subscribed to the idea that public services and basic human rights run for private profit is the way forward. But look where that has landed us.

“The privatisation of our major public services has been an acute and painful failure – one that continues. A lack of state influence in our economy hasn’t made things more competitive. It hasn’t made things more efficient. And it has not lowered prices. The Green Party wants to see these crucial services – energy, water, transport – back in public hands where they belong. Where decisions are made for the good of you and your family, [for] people – not to line the pockets of shareholders.”

Ramsay built on this by referring to the crisis in the NHS. Branding the problems in the health service a “crisis of privatisation and outsourcing”, Ramsay said, “Nowhere is the need for services to remain in public hands more acute than in our health service. Underfunding and selling off parts of our NHS have led to chronic staff shortages, soaring waiting times and a hugely demoralised workforce. There are 6.8 million people on NHS waiting lists – people living in pain, struggling through daily life – waiting for months and years for treatment.”

The Greens’ calls for public ownership go further than what the Labour Party committed to at their conference earlier this week. Keir Starmer announced the next Labour government would establish a publicly owned energy generation company, and delegates were told that Labour supports public ownership of the railways.

Elsewhere in their speech, Denyer and Ramsay slammed the Tories’ disastrous handling of the economy since Liz Truss became prime minister. Denyer called the last week “complete chaos” and “humiliating” and hit out at Kwasi Kwarteng’s ‘mini-budget’. Denyer told the conference, “In pubs and gyms, staff rooms and supermarket queues everyone is talking about it – there is panic. Over mortgage rates, the prospect of lost pensions, over yet more spiralling costs. And for what? So that the Tories can give tax cuts to their mates. £45 billion back to the 1% at the top of the pile. They like it – everyone else can lump it.

“Not only are the Tories incompetent – let’s put to bed to the now laughable notion that they are ‘good on the economy’ – but they’re also clearly committed to deepening inequality in this country. They want the rich to get richer and it’s no skin off their noses if the poor stay poor.”

Ramsay went on to say that this is the continuation of 12 years of Tory government. He said, “And the Tory commitment to inequality we’ve witnessed this week isn’t new. From the deep, cutting austerity of the Cameron years. To Theresa May telling struggling nurses that “there’s no magic money tree”. To Boris Johnson’s refusal to keep the £20 Universal credit uplift. It’s all paved the way to where we are today – in chaos. Because whoever the leader, the Tories are a party that rewards their wealthy members and donors and don’t give a damn for the rest of us.”

Turning to the specifics of the government’s cost of living packages, the co-leaders accused the government of pouring billions into “corporate coffers” and accused private company shareholders of “skimming off a reward at every level”. Ramsay told party members, “below the surface of this energy crisis is a whole system that’s critically unfair – built with layer upon layer of corporate profit baked in, and shareholders skimming off a reward at every level.

“So while freezing bills was needed – the Government should have demanded something in return for the billions going to energy firms. This was the chance to take our rightful share from the companies who have been fleecing us for far too long. Instead, what we’re seeing is billions poured into corporate coffers. Bills frozen until – conveniently – just after a potential next general election. And absolutely no action to address the underlying causes of the energy crisis.”

In their speech, Denyer and Ramsay went on to reiterate their party’s policy on the crisis – taking the big 5 energy retail firms into public ownership, freezing the energy price cap to October 2021 levels, introducing an emergency tax package on polluting companies and the richest 1% of households and using that money to roll out a nation-wide programme of insulation and renewable energy investment.

The Green Party’s conference runs until Sunday. Party activists will be debating a range of policies – including their position on a £15 an hour minimum wage, strike laws and the restitution of cultural objects. Members will also be debating whether to affiliate to the Enough is Enough campaign.

This article is published jointly with Left Foot Forward.

« Green opposition to NATO is strategically and morally right
Under 30s are a ‘generation of insecurity’, Young Greens co-chairs tell Green Party conference »