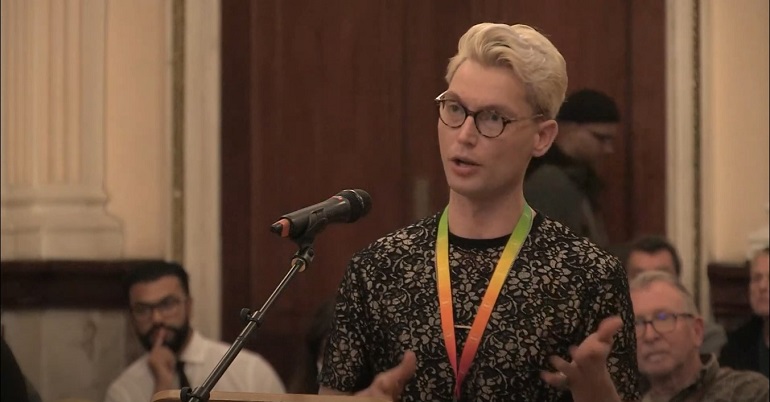 Bright Green is offering all the candidates standing to be on the Green Party’s list for the 2024 London Assembly election the opportunity to set out why they are standing and their vision for London. This article is published as part of that series. The full series of articles can be found here.

I am the underdog here. The non-binary person who grew up in the town with the UK’s lowest house prices, depletion of jobs due to the shutting of naval bases and even the local hospital was shut. I grew up with my grandparents who were both from West London – I’ve visited the church in Ealing where they married. I moved to London over 13 years ago and would never leave because London is welcoming, encapsulating and hard-working. We all know this and unsurprisingly that is why we bring in 22.74% of the UK’s total GDP.

As Londoners, we can be aspirational and hopeful.

We know a green future is possible and we can give that to more generations to come. With the optimism and positivity of Londoners, we can make this happen. I told my running mate Nate Higgin’s we can do this, I told him it over and over again. I fought and fought because I have never been happier than campaigning and being elected, it was my proudest moment – sometimes being the underdog and having aspirations, success rarely comes. This is a true moment of inspiring others to our Green messaging that we can all celebrate in this Green win – in fact, it’s bigger than that, Newham Council had 100% Labour for 12 years without opposition until we were elected.

Greens dare to be different, we say the difficult things others won’t because silence serves no one.

I know this as the leader of the opposition on Newham Council, holding the administration to account. It is through the quality of leadership that Greens inspire and others follow. It is because of the lack of leadership from the Conservatives and the Labour party that we now have this great opportunity to pick up more seats in City Hall.

Our policies have to stretch from Camden to Croydon, from Stratford to Soho, and from Ealing to Epping. We have to connect with voters – pushing the full range of our policies, and not just the climate and environment, although, of course, they do remain the spine that shapes them. We need to be connecting with more than just one borough or on one localised or singular issue – we must connect with the voters at all levels and living in all environments to maximise votes.

I’ve most recently had the pleasure of serving as a Green Party Regional Council London Representative thanks to you, and until recently I completed four years of service as elected Chair and Co-Chair of the Newham Green Party. I have experience with live TV and radio amongst other media outlets. I have the drive and want to inspire people on the doorstep and stand up for Londoners to improve their daily lives.

Today I ask you to vote Councillor Danny Keeling [they/them] as your first choice to join the brilliant power of three we already have in City Hall. For a united, inclusive and enthusiastic team in City Hall that can inspire London to vote Green in this coming election.