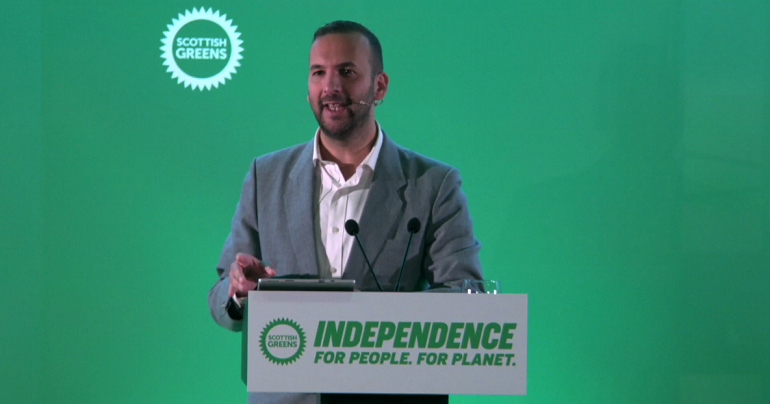 Polanski was elected deputy leader of the Greens in England and Wales in September, following Amelia Womack who served eight years in the role. Polanski’s election took place as a bitter dispute within the party over trans rights has come to a head. For a number of years, a small minority of members of the party have repeatedly sought to overturn the party’s strong policies in support of LGBTIQA+ rights.

This issue dominated the deputy leadership contest, which saw fiery clashes between Polanski and the third placed candidate Shahrar Ali. During the election, the Scottish Greens co-leader Patrick Harvie made the unprecedented move of calling for Ali to be expelled from the Green Party of England and Wales.

As a result of this context, Polanski’s speech to the Scottish Green Party conference was against a backdrop of a motion being debated this weekend which could see the Scottish Greens formally cut ties with their sister party south of the border. The motion has been submitted to the Scottish Greens conference by a co-convener of Rainbow Greens – the party’s official LGBTIQA+ wing – who told Bright Green earlier this year it was designed “to encourage the appropriate action to heal the Green Party of England and Wales, make up for its past complicity on transphobia and be clear going forward a culture war that pits women, trans people and the wider LGBT+ movement against each other will not help save the planet.”

The motion was explicitly referred to by Harvie in introducing Polanski, although he did not express a view on whether members should vote for or against it. Many in the Scottish Greens – including some senior figures – expect that motion to pass.

In light of this, the most important moment of Polanski’s speech came as he offered a passionate defence of trans rights – in many ways a final attempt to persuade the Scottish Greens not to pass the motion. He told the conference, “I’ve spoken about my pride in being elected as the first Jewish and Gay deputy leader in our history. But some people online asked me ‘Why is that important?’ It’s a fair question, but I think there’s an even fairer response – because diversity is important, representation is important, and Greens will always champion communities. And of course I have the back of the gay community and the Jewish community, but we know as Greens we will stand with all marginalised communities – whether that be disabled people, refugees and of course the trans community. I’ll say it once and I’ll say it every time. There’s no LGB without the T.”

He went on to accuse the Tories of engaging in a culture war to “scapegoat” trans people. Polanski said, “The trans community are a tiny minority and often, not always, some of the most vulnerable people in our society. Yet they have been demonised at the centre of a Conservative culture war – at the centre of a war that only has one tactic – to scapegoat, to other, to blame.”

Continuing, Polanski said that the ongoing “convoluted arguments” about trans rights were a distraction from tackling real injustices in society. He went on to make clear his belief that there attacks on marginalised communities are interrelated, and there is no conflict between the rights of women and the rights of trans people. He said, “Conference, it’s important to say to all parties that all this time spent debating convoluted arguments about whether a man pretending to be a trans woman to gain access to a bathroom in order to commit violence against a cis woman – which by the way is already a crime in society – is time that is not spent tackling the real systemic injustices in society.

“Now, as a man, I’m cautious sometimes about wading into this argument – because we know it should always be led by women and we have enough sometimes of men talking. But we also need to show solidarity and be on the right side of history. And being a Jewish, gay man, I know with hate crime rising people won’t differentiate between gay, jewish, disabled, Gypsy Roma Traveller or trade unionist, and conference when they come for one of us, they come for all of us – and we will always stick together.

“Trans rights are human rights. And we know that as Roe vs Wade in the USA is being disabled by extremists, or dismantled – women’s rights are human rights too. These things are not in opposition and nor does it erase anyone’s space to be gay or lesbian – none of us are free until we are all free. We must always support marginalized people and provide protection when asked for, side by side in solidarity.