The fight for Better Buses means a better democracy

Patrick Harvie, Glasgow’s Green MSP, has launched a new campaign for the interests of the city’s bus users, Better Buses. 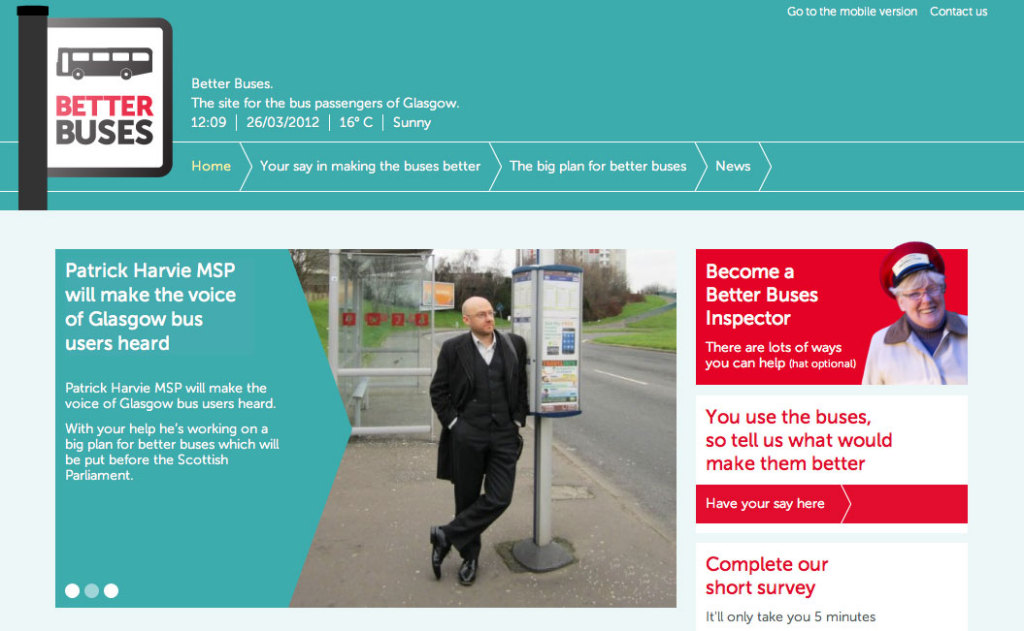 Harvie said at the launch of the site:

Motorists have loud and powerful lobby groups – I want to give a voice to Glasgow’s bus users. Buses should be affordable and accessible, and shaped by people’s needs rather than company profits.

Glasgow has the highest proportion in Scotland of residents without access to a car – 48.8% of households. So while campaigns like this are much needed across the country, Glasgow is an obvious place to start.

The campaign will ultimately seek to put pressure on bus firms and the Scottish Government to make improvements to Glasgow’s bus services, but in many ways it is this early stage of the project that is most interesting.

The provides a platform for Glasgow bus users to arm the campaign with both their experiences and their ideas for improvement. Passengers are urged to ‘Tweet from their seat’, sending their real-time verdict on the service to the Twitter account @betterbuses. On the site itself is a platform for longer rants or proposed solutions, and users can then rate these contributions on a 5-star system.

Eight proposals for changes, written by Harvie’s campaign team, are also available for voting and commenting on. I assume that the best contributions coming direct from passengers will also join this list as the campaign develops.

So what you have is not just a campaign platform – the ability to press for a change pre-determined by, in this case, an MSP – but a community decision-making platform. Through Better Buses, Glaswegians have a tool with which to discuss the shortcomings in their bus network, and come to conclusions as to the priorities for action and solutions they want to see.

What Harvie has created is in the tradition of community democracy projects like New Orleans’ Neighborland, which come not from the top-down NGO-style campaigning model but from a desire to put power back in ordinary people’s hands.

Community decision-making, or, as it is sometimes grandly known, radical democracy, is a cornerstone of Green thought and arguably the main thing that distinguishes Green politics from the bureaucratic democratic socialism with which Green politics shares so much in policy terms. However, changing the very system by which we make decisions is daunting, and few Green politicians have really been able to advance this cause.

In a week when the Cam Dine With Me scandal has demonstrated all too clearly the consequences of centralised power and further eroded public trust in politicians, it’s encouraging that one politician is willing and, more unusually, has proved able to begin a process of genuinely handing power back to the community he belongs to.

I wish the Better Buses campaign the very best of luck in improving FirstBus’ reliability, accessibility and cost, but I hope in the long run we will come to see those as the least of its achievements.