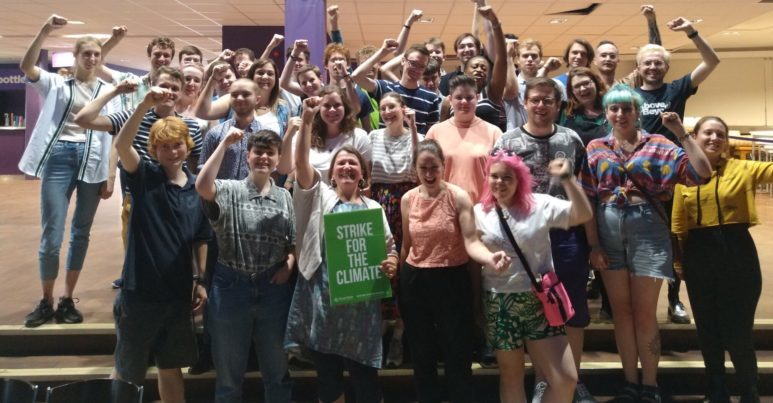 Beating Brexit and getting young people elected were top of the agenda as the Young Greens of England and Wales held their annual convention in Norwich this weekend.

On Saturday Young Green activists from across the country packed into the UEA’s Lower Common Room for a series of talks on fair pay and workers rights, featuring a conversation on striking hospitality workers with Greg Howard of the Independent Workers Union of Great Britain (IWGB).

Later in the day the UK Student Climate Network hosted a panel on the school climate strikes, whilst others discussed how to organise and fight for change at a local level. Members were also given the chance to quiz some of the candidates standing for election to the Young Green executive committee.

Ellie Chowns closed the day by telling the convention about her work in Brussels and her path to becoming an MEP – as well as insisting she had hope that by standing up for what they believe in the Greens could still undo the work of the far-right.

Europe stayed on the agenda on Sunday as Femi Oluwole of youth anti-Brexit group Our Future Our Choice kicked off the day by telling delegates how to work together to stop Brexit.

He was followed by former London MEP Jean Lambert who drew upon her years of work on the EU’s civil liberties committee to explain how we can help to shift the negative narrative surrounding migration.

In the afternoon a packed room heard from MEP and former Mayor of Sheffield Magid Magid, who gave his opinions on combatting the far-right, halting Brexit and getting into green politics.

Co-leader Siân Berry closed the 2019 convention by telling Young Greens they were the “conscience” of the party, as she pledged to dedicate more budget to the youth wing and asked members across the country to support her campaign to be elected Mayor of London in 2020.

The convention saw a change in leadership for the youth and student branch of the party, as the results of the Young Greens executive committee elections were announced on Sunday.

Rosie Rawle and Thomas Hazell became co-chairs – Rawle was re-elected to the role, whilst Hazell replaced Liam McClelland, who had stood for another term.

The Young Greens AGM was also held across the weekend and members voted on a series of motions, standing orders and resolutions.

A motion calling for the role of British colonialism in causing climate change to be recognised was passed, as was another which resolved that the Young Greens would resist language which characterises migrants as economic resources. Members also voted to stand in solidarity with the school climate strikers and to call far-right politicians who promote hatred of migrants “cowards”.

Members decided to abolish the senate, which had represented regional groups within the Young Greens structure. The motion noted that the senate had been unable to work as it had been intended to.

A constitutional amendment seeking to replace the Young Green executive committee’s non-portfolio officers with more specified roles failed to pass, as did a set of requirements for cross-party co-operation.

Lucy Pegg is a journalist and campaigner, whose writing focuses upon politics, the environment and student issues, among other topics. She is a Green Party Councillor in Oxford.
View all posts by Lucy Pegg →