Tom Chance: ‘Greens can take London back so housing is provided for the common good’

Tom Chance, standing for Green candidate for London Mayor, discusses how the Greens can solve the housing crisis in London. You can find more of Bright Green’s coverage on next year’s London Mayoral and Assembly elections here. 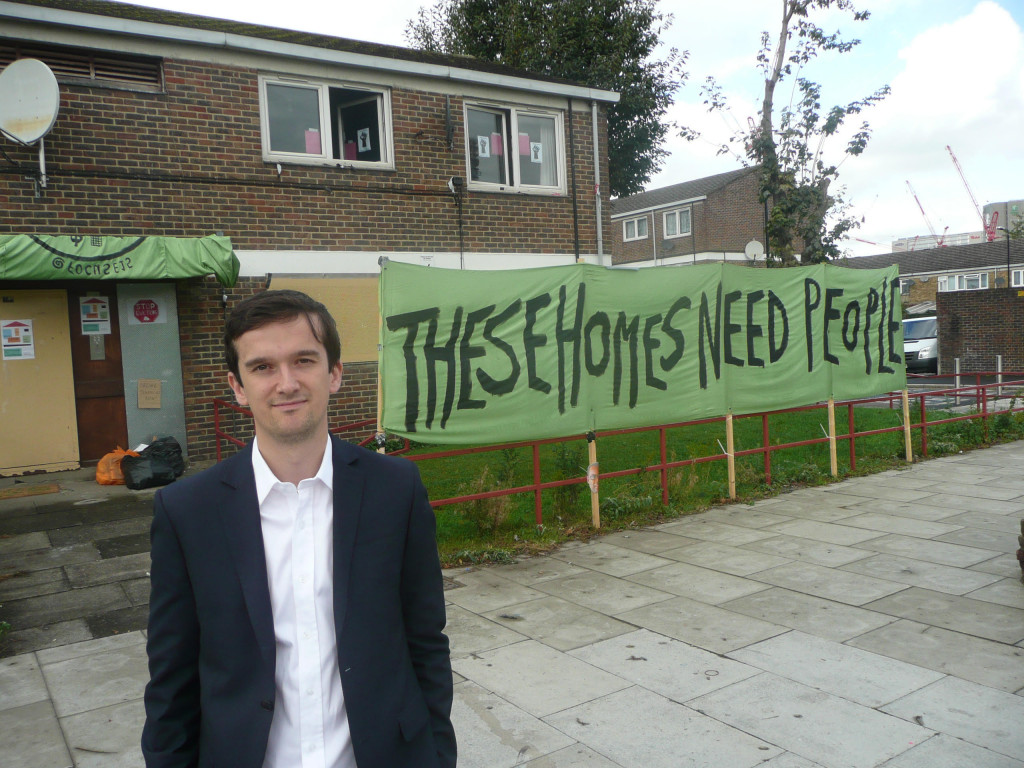 Gerlinde is one of those housing activists that defies any stereotype. When I first met her with Darren Johnson she offered us freshly baked biscuits and coffee, telling us about her career in finance and entrepreneurship, before reeling off a by-now-familiar story of how her estate was earmarked for demolition.

I’ve had a cup of tea with a father facing eviction from the New Era Estate in Hackney, who earns a middling income driving for a gas supplier and wanted to stay close to his children. I’ve ended up in the pub with tenants and leaseholders from the Central Hill estate in the south of Lambeth, a mix of ages, ethnicities, jobs, backgrounds fighting to save their estate. I spent some time at the Focus E15 occupation of the Carpenters’ Estate, single mums supported by revolutionary communist activists – with a little support from myself and Darren Johnson – is finally getting somewhere with a neighbourhood plan to take over the regeneration of their estate.

Councils and corporations want to pick these people up with their tweezers and drop them into a file labelled ‘M’ for malcontents. But they defy this stereotype – all sorts of people are being directly affected by our housing crisis.

What unites them is a growing sense that they don’t have much control over their homes and lives. They are alienated from economic and political processes that should serve them. They have had to fight against politicians in town hall and city hall.

With the Green Party in office, they should be able to fight from City Hall.

My housing policy ideas would let them take their homes back, take City Hall back – to take back control over the solutions to our housing crisis.

Their stories taught me that this crisis won’t be solved by just building lots of homes. Tessa Jowell said that the solution to London’s housing crisis must begin with “a clear partnership between central government, councils and the private sector”. But there is no space for those people I met in her policy, except in those tweezers. The partnership of the state and private capital is more likely to bulldoze the homes people need, all in the name of building more homes.

There’s an alternative approach gaining ground across the UK. Community Land Trusts are a kind of co-operative that keep control in the hands of the local community. Councils and developers can work in partnership with them, all together for the common good. I recently heard a Tory councillor from Cambridgeshire and a Green councillor from Brighton unite in supporting CLTs because, they said, if you can show that homes are built for the “sons and daughters of the town”, they will meet local support instead of NIMBY opposition.

In Cornwall, councils supported an umbrella CLT that acted as an enabler for anyone wanting to start a scheme in their local area. It has been a huge success. I would bring this idea to London, creating a London Housing Co-operative. Suddenly, the dozens of groups trying to take control of their housing situation across London would find City Hall on their side.

By borrowing against business rates income, and reallocating some of City Hall’s existing affordable housing budget, I would establish a £2 billion fund for the co-op. This would give it the clout to grant fund co-op homes on social rents, and renovation schemes, and much more.

The housing co-op would also provide a viable alternative for tenants and residents fighting flawed regeneration schemes. It would provide technical support and funding for tenants to exercise their Right to Transfer to their own co-op. This power was introduced in the 1985 Housing Act, and new regulations were laid down in 2013.  A campaign on the West Kensington and Gibbs Green estates in Earl’s Court is already trying to exercise this right, with some support from myself, Jenny Jones and the local Green Party. The co-op would then offer grant and loan funding so the resident-led co-op could develop a viable business plan to refurbish existing and build new homes.

When the tenants on the Andover Estate in Finsbury Park took over plans for their estate, they found space for seven times as many homes as the council had planned for. Our co-op could help them implement that, bypassing the council which has subsequently taken its tweezers out to remove the residents from the picture.

The New Era Estate tenants’ campaign ended with a housing charity buying their estate and finding a way for them to stay put. This co-op could offer the same opportunity to others fighting neglectful landlords and speculator buyouts.

Finally, I would seek the power for this co-op to seize homes left empty by speculators and investors and let them out on secure tenancies. Councils have a weak version of this power, called an Empty Dwelling Management Order, and they barely use it. I’d want to get tough on these empty homes, not just because they’re a waste, but to put off the buy-to-leave speculators. This government is unlikely to grant me that wish, but we should begin building pressure for these powers.

We need to send a message out loud and clear – these are homes for Londoners, not assets for speculators. These are homes for people, not rows on a spreadsheet for tweezer-wielding bureaucrats. A Green City Hall will work with you to take London back so housing is provided for the common good.