Alex Phillips rules herself out of Green Party leadership election

Nominations for the Green Party of England and Wales leadership election open on June 1, as well as for elections to the Green Party executive. And this week, former Green MEP Alex Phillips ruled herself out of the election.

Phillips was asked at a Q+A session at an online event hosted by the Young Greens what her future plans are. She responded by making clear that although she had given thought to the idea of standing for the leadership, she would not be doing so this year. She also revealed that fellow former MEP Magid Magid would not be standing either.

Phillips said that part of the reason for her decision was that she believes current co-leader Sian Berry must enter the London Mayoral race in her current post. Berry has yet to announce whether or not she will be restanding for the position, and no other candidates have emerged either.

Despite no candidates having yet been announced, conversations amongst the membership as to what they want to see from the next Green Party leader have already begun. Bright Green is running a series of articles exploring this.

This week, Young Greens co-chairs Rosie Rawle and Thomas Hazell called for the next Green Party leader to embrace a fresh “Green class politics”. They wrote:

Our party and our leadership must continue to recognise just why social and climate justice must come together. They must emphasise the need for the world to diverge from a dead capitalist consensus and move to a new type of society.

The fight must not just be for an economy that saves the world, but an economy that protects the security of everybody on it, global north and global south. In the face of this, our new leadership should recognise the need for a fresh green class politics.

Additionally, former Green Oxford City Councillor Sam Coates argued for the next Green Party leader to articulate a vision of a post-covid world:

In the midst of a pandemic exacerbated by capitalism’s contempt for the natural world, we need to articulate a vision that protects people’s basic material security from the rentier class and rejects a catastrophic economic recovery plan based on reflating fossil fuels, airlines and consumerism.

With the economic crisis triggered by coronavirus still taking hold, governments around the globe are bailing out companies that could otherwise go to the wall. While many countries have placed few conditions on such bailouts, Scotland has this week taken a different approach, following similar steps taken by countries like Poland, Denmark and France. Scotland will ban bailouts for companies avoiding tax.

This move isn’t the final word, but it marks the beginning of a new approach to tackling the companies which shamelessly avoid paying tax, and we will continue to build on what’s been achieved today.

If we are to build back a fairer, greener and more equal Scotland, then we cannot return to an economy which puts obscene levels of growth before the wellbeing of our citizens.

It’s time for these companies and their owners to face up to their responsibilities. ‘Business as usual’ was causing poverty, inequality and environmental destruction, and it didn’t provide an adequate safety net for people in insecure jobs and homes. That needs to change.

In addition to this, the Green MSPs also won a series of other victories on Covid legislation, including enabling students to get out of exploitative accommodation contracts, and protections for 16 and 17 year olds during lockdown.

The UK government’s Trade Bill passed its second reading in parliament this week – the latest step towards it becoming the new legislation that governs the UK’s trade deals post-Brexit. Campaigners have long criticised the Bill, alleging that it could see the NHS become further privatised and reduce regulation, including on food standards.

Among those to oppose the Bill’s passage through parliament this week was Green MP Caroline Lucas. And writing in the New Statesman, Lucas accused the government of bringing forward a Bill which is a “race to the bottom” on standards:

There is nothing in the Trade Bill that will protect the food standards which keep us safe, nor safeguard the livelihoods of our farmers who follow much higher animal welfare standards. This is a race to the bottom.

She went on to highlight the scale of the threat such a Trade Bill poses. She wrote:

It’s not only food and environmental standards that are at risk. Trade decisions have the potential to change public services, undermine workers’ rights and restrict the ability of governments to address social and environmental challenges.

This week, the Eastern Daily Press revealed that the Labour run Norwich City Council has lost £6 million of taxpayer’s cash on setting up a property company. The council was also accused of covering up the scale of the losses.

One Green Councillor accused the council of “catastrophic mismanagement. Norwich Green Party Councillor Nannette Youssef made the comments on Twitter. She tweeted:

£6million of council tax payers money was lost due to catastrophic mismanagement, serious conflicts of interests and an alarming lack of accountabilityhttps://t.co/EVgNNz4pQl

She was joined in this condemnation by fellow Councillor Jamie Osborn, who released a video in which he accused the Labour council of entering into a “dodgy contract”: 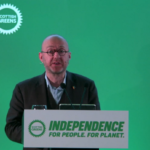